If you knew how long I ago I had started the draft for this post, you would laugh and wonder what I’ve been doing. Well, I’m finally publishing it, good or bad. It’s time to get on with things! So here you are:

I have decided to consolidate the reviews of my two recent reads into one post, since I have managed to read the more recent volume before posting a review on the first. :} So without further ado, we shall begin with Mere Christianity, by C.S. Lewis.

This book was among our yardsale finds from last summer, and a few weeks ago I finally got around to reading it. Due to the format of the book (it consists of a collection of lectures that were originally delivered over the radio and were later modified for printing), and the time that has passed since I started reading it, I’m afraid my review will have to be more of a general impression of the book rather than a specific description of its content.

In this small book, C.S. Lewis attempts what I would consider to be an overwhelming undertaking: to summarize Christianity. My feeling is that, on the whole, he does an excellent job of it. I read somewhat warily at first, having heard that C.S. Lewis wasn’t always theologically sound in his opinions. However, aside from a few small things that made me wonder a little (unless I missed something huge), I was pleasantly surprised and didn’t find anything off the wall.

The book is divided into four sections: 1) Right and Wrong as a Clue to the Meaning of the Universe, 2) What Christians Believe, 3) Christian Behavior, and 4) Beyond Personality: Or First Steps in the Doctrine of the Trinity. Because this book was originally delivered as a series of lectures over the radio, the sections are further divided into short, essay-like chapters. As I read through the different sections of this book I was impressed, as I was when I read The Screwtape Letters, at the author’s great logic, which enables him to pierce through man’s unwitting, foolish ideas about himself and others and uncover the real reasons and motivations for the way he thinks and acts. This was especially evident in the first part of the book, which talks about human nature. I think the section I most enjoyed was the third section, on Christian Behavior. I found myself practically nodding in agreement as I read the chapter in that section on pride, which is something that I have struggled with. The insight that C.S. Lewis has into the nature of man and the forthrightness with which he writes about it are things I appreciate about his writing.

The other element of C.S. Lewis’s rhetoric which also greatly impresses me is his creative, masterful use of metaphor. In almost every lecture, or essay, in the book, he uses metaphoric illustrations to clarify the difficult subjects that he covers. It’s amazing how much easier it is to grasp a confusing concept when it is compared to something else much simpler. I also enjoyed the comfortable, conversational style of the writing that is carried over from when the lectures were first heard over the radio. On the whole, I recommend this book for what it has always been accepted as: a Christian classic. 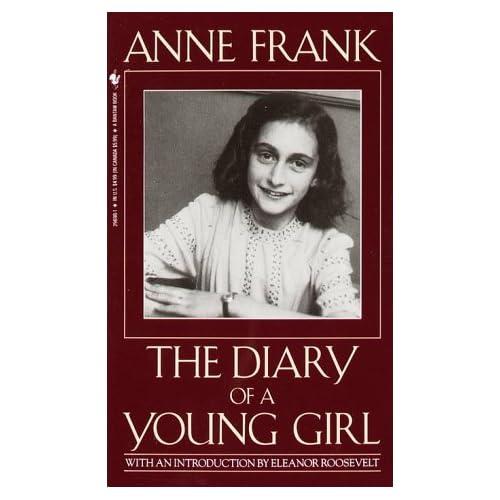 Next, we come to Anne Frank:The Diary of a Young Girl, or Het Achterhuis (closest translation The Secret Annexe), as the original German title reads. This is the journal that Anne kept during the last two years of her life. Most of the stories we hear of the Second World War are of those in the battlefields; not much is told of the civilians who occupied the countries that were in the thick of the war. This book is an extremely honest look at the lifestyle which thousands of Jews must have taken on during those years when the safest thing for them to do was to go into hiding.

Anne’s diary begins two days after her thirteenth birthday; she was a carefree, young girl, only somewhat inconvenienced by the restrictions placed on Jews. Among her chief concerns were dealing with the many boys who liked her and coming up with clever ways to compose the essays that her teacher made her write as a punishment for being a chatterbox in class.

However, less than a month later, Anne’s life changed drastically. Her sister Margot had been summoned for deportation and it became imperative that the Franks go into hiding immediately. Thanks to the foresight of their father, Otto Frank, a hiding place had been discreetly prepared for them over the past several months, their possessions gradually smuggled out of the house and into the “Secret Annexe”. They had been almost ready to move when Margot’s summons came, so they set their plan into action a couple of weeks early and went into hiding in a large office building.

Shortly after the Franks were settled into the “Secret Annexe”, another family joined them – the Van Daans, who had a son, Peter, who was a few years older than Anne. The two families didn’t get along very well (although later on a friendship sprung up between Peter and Anne), and it seems that most of the time there was some kind of strife going on, not only between the families, but also between the members of the families. Anne herself was often the subject of these arguments, with the adults picking apart her character and faults. Her circumstances aside, I still feel sorry for her because of the relationships she was surrounded with. She and her mother never got along, and while she dearly loved her father, he did not give her a fulfilling father/daughter relationship. Her older sister Margot was looked on much more favorably than Anne, and at times was quite catty (although later on they got along much better). At first, Anne remained outspoken, no matter what they thought of her. As time went on, however, she studied the people that surrounded her and learned how to deal with them. Even though she matured far beyond the always-laughing, joking, and lighthearted girl that she had been before, she avoided showing a more serious side of herself because of the way that her family reacted anytime she let the deeper, more thoughtful side of herself show through. Eventually, Anne became self-sufficient; she determined to be her own mother, depending on no one but herself for her emotional needs. She often felt superior to the adults, who, though quite immature in their own right, often put the “children” of the Secret Annexe down as immature and unknowledgeable. The strength of Anne’s spirit can be clearly seen in the way that, without any real guidance and even less understanding, she made her own way into young womanhood.

Day to day life in the Secret Annexe posed many unique circumstances and challenges that would be vexing in themselves, let alone having the extra unpleasantness of being surrounded by a peevish group of people. They had to be very careful of what they did at certain times of the day; they had no means to take a real bath, and so had to make do with what they could to stay clean, no one could “pull the plug” (flush the toilet) after a specific time in the morning, and during the day while people were in the office building below they had to talk in whispers and be very careful not to make noise. Anne and the other young people continued their studies and read books that were smuggled in every week by the small group of people who covertly visited them and brought needed items to them. They studied English, French, Geography, shorthand, and Anne’s most hated subject, Algebra. Anne loved Greek mythology and studying family trees, and there were times when she would write in her diary exclaiming over all of the things she needed to accomplish in a day. In light of what I see from young people today, it is very interesting to me how the occupants of the Secret Annexe kept themselves busy (and sane) for over two years with no other entertainment than their books. I would like any teenager today who complains of being bored to read this book and then see if they dare to open their mouth in such a complaint again. I myself read this book shortly after experiencing a bout of cabin fever and I was ashamed of the way I had allowed myself to grumble and complain; I, who can open my windows and smell fresh air and feel the sun on my face, not worry about making noises in the middle of the day, and step outside my house at will without a threat of discovery! I have nothing to complain about.

As the war went on, life became harder for the occupants of the Secret Annexe. They had the same foods for days – sometimes it was potatoes, endives, kale, lettuce, or spinach; morning, noon, and night – and not of the freshest quality either. Eventually they had to cut down to two meals a day. As rations became harder to get, crime rose and burglaries at the warehouse and office building became frequent. As a result of that the threat of discovery loomed ever greater.

The last entry in Anne’s diary was made on Tuesday, August 1, 1944. On August 4, less than a year before the end of the war, the Gestapo penetrated the Franks’ hiding place. They had been given information by a Dutch informant, who was paid the usual amount per head for his betrayal. I can’t remember exactly how much he received for each person, but I believe it was something like £1.40. A small payment for the life of a human being. The members of the family were sent to concentration camps and in succession to her mother and sister, Anne died in a concentration camp sometime in March, 1945 – about three months before her 16th birthday. Her father was the only survivor of the Franks and was the one to publish her diary.

This post is long-winded and I need to close; yet there is so much that I feel I’ve left out! So please pardon my inability to summarize this book in a more concise manner; reading it was an experience unique from any other book I have encountered. It showed a different side of the war – most of the stories we hear are of those who fought heroically; not much is told about the personal lives of the victims of the war -those who had no defense but the cleverness of their hiding place and the few people who risked everything to help them. I found Anne’s diary interesting, honest, and at times even a little humorous, but the tragedy of how it ends hangs over the rest of the entries like a great shadow, especially not knowing if she ever trusted in Christ as her Savior or not (with her family being Jewish it doesn’t seem likely; however, her parents did give her a New Testament at one point). I read through the book quickly, realizing that while I wanted to know what it contained, I didn’t want to dwell on it too much or for too long – it’s just so tragic.

Since I can’t come up with an adequate summary statement, I will simply apologize once again for my long-winded and somewhat scatterbrained post and say that I hope my future book reviews will be much better! Maybe I’ll read some fiction next. 😉