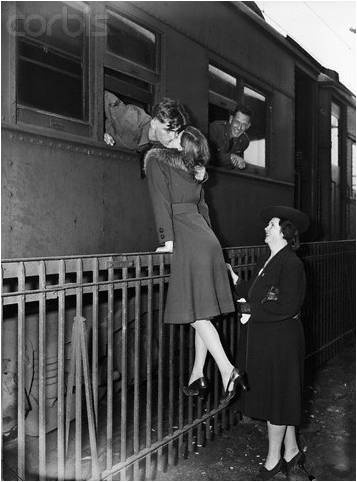 Emma watched her grandmother’s face, more captivated by what she saw there than on the television, where a black-and-white film showed a couple parting at a train station. The young woman stood on the train station platform, waving her handkerchief at the receding form of a soldier hanging as far as humanly possible over the back railing of the train, waving his hat in wild swoops. Desperation to say the things they might never again be able to say in person opened the tongues that moments ago had been tied by nervousness; they called promises of love and letters to one another as the train slowly chugged away from the platform, stretching the cords of love between them like a thready spiderweb: fine and delicate, but with the strength of steel to span time, distance, and whatever else might threaten their love.

Emma could discern all of these unspoken messages communicated in the last seconds of the movie, but the meaning of the look on her grandmother’s face eluded her. It seemed unusual that an ending like that would so enrapture someone, but that was exactly what the soft, dreamlike look in grandma’s eyes portrayed as she sat leaning forward slightly in her chair, staring at the television. A few of the lines in the woman’s wrinkled face fell away in her rapture and made it easy for Emma to imagine what Grandma must have looked like when she was the same age as the young woman in the movie. She continued to study her grandmother’s face as the words “THE END” flashed across the screen with a triumphant musical flourish. The screen went dark, but the look in grandma’s eyes remained. After a moment she leaned back in her chair and sighed.

“Love was sweeter then,” she said, still gazing at the television.

“What?” asked Emma, not understanding the remark.

“Love was sweeter then.” She said it in a less dreamy voice this time, coming out of her trance and fixing the blanket tucked over her lap.

“What do you mean by that?” Emma asked again, hoping for a more expansive answer this time.

“Your grandfather and I had to say goodbye just like the couple in that movie,” Grandma began. “Those were uncertain times for everyone. When we said goodbye during wartime, we never knew if it was for months, years, or a lifetime. We had to treasure the moments we had together; to push aside the constant fear of ‘what ifs’ and simply cherish one another while we had each other. Times like that taught us to let the little things go and to put our energy into building something that could outlast a war, and even time itself.” Grandma sighed again. “Yes, love was sweeter then.”

Emma looked up as her grandfather entered the room and put his hand on Grandma’s shoulder. She watched as they smiled at each other, and Emma thought to herself that love was still sweet – it just had to be the right kind of love.