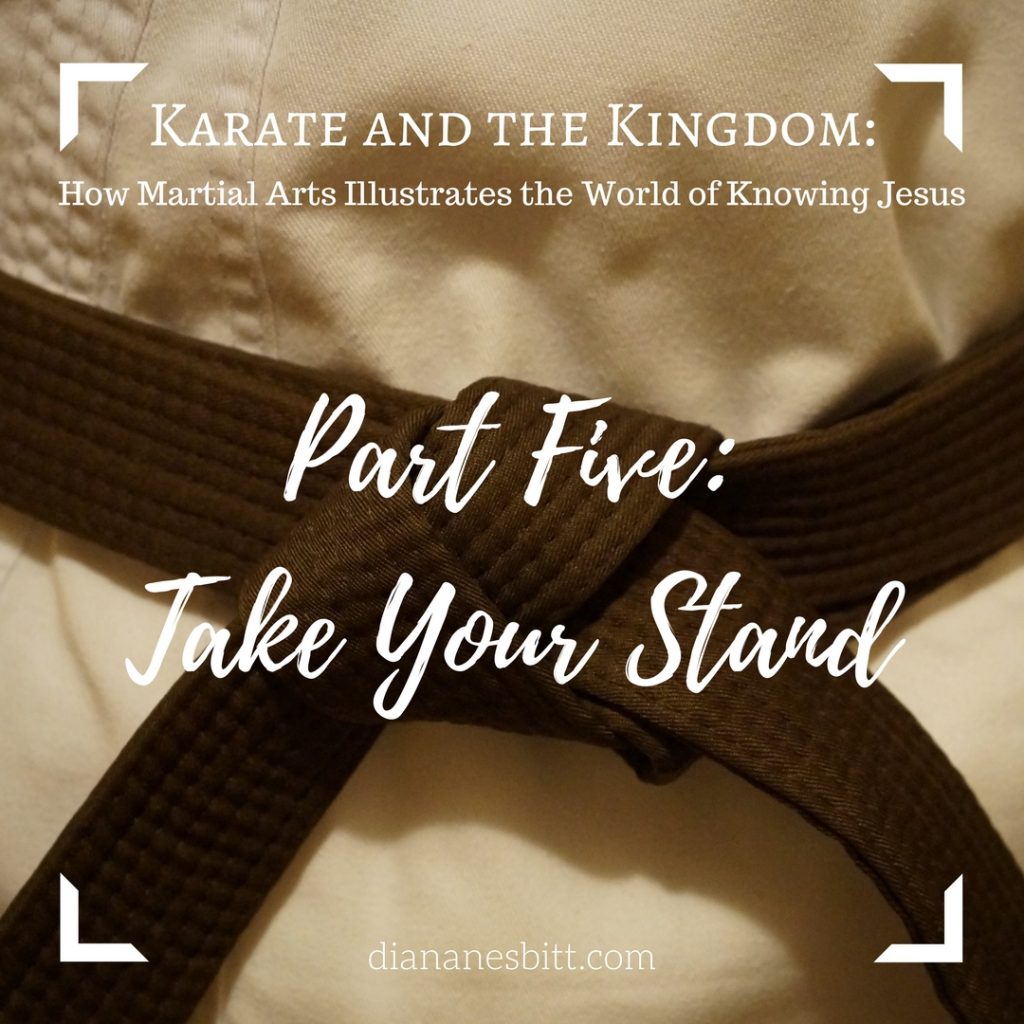 Sometimes, when I stand at the edge of the mat at karate and watch the higher ranks perform a kata, I can’t escape the humor in it all. Here we are, a bunch of people with bare feet, glaring down invisible bad guys as we kick and punch and make weird yells and whistling noises with our breath. We take it so seriously (with good reason), but sometimes when I think about what it looks like on the surface, it makes me laugh inside.

Regardless of the occasional humor I may find in karate training, I know that in order to perform well when it counts most, you have to fight an invisible foe and risk looking like an idiot. We practice and have fun and laugh at ourselves, yet we have our somber moments as well, because we know that this art exists because we live in a world where there are real bad guys (and girls) who do bad things.

The foundation of karate training

In karate, our training prepares us for conflict in five key areas: stance, posture, balance, mindset, and power generation. These are known as the five principles of Sanchin (Sanchin is the first kata in Uechi Ryu, and its forms constitute the foundation of all our training). Each one builds on the other, and if any one of the first four principles is missing, you won’t have the fifth.

Stance is the foundation upon which everything else depends. Without a strong stance, you have nothing. In Uechi Ryu karate, we have a very specific fighting stance. Feet are about shoulder width distance apart, the heel of the front foot tilted out slightly and resting on the same line as the toes of the back foot. About 60% of the weight is on the balls of the feet, firmly planted yet ready to move in an instant.

Posture carries the strong stance up to the rest of the body. Knees are slightly bent, leg muscles tensed and pulling together, causing the feet to grip the floor. The pelvis is tucked under with the abdominal muscles engaged, back straight, chin level. Arms are held bent with the elbows fist distance away from the ribcage, hands palm up and fingertips level with shoulders.

Having the right stance and posture helps us maintain good balance. Many of the exercises we do in class teach us how to maintain our own posture and balance while taking advantage of opportunities to break that of our opponent.

Mindset is key in bringing together these physical techniques when the moment calls for it. Without good focus and mental clarity, all of our physical abilities will go out the window in a conflict.

When these four principles are combined, they produce power generation: the amount of force with which you can oppose your enemy.

To take a stand against a spiritual enemy also requires intentional training. The nature of spiritual warfare and the techniques for succeeding in it are described in Ephesians chapter six:

“Finally, be strengthened by the Lord and by His vast strength. Put on the full armor of God so that you can stand against the tactics of the Devil. For our battle is not against flesh and blood, but against the rulers, against the authorities, against the world powers of this darkness, against the spiritual forces of evil in the heavens. This is why you must take up the full armor of God, so that you may be able to resist in the evil day, and having prepared everything, to take your stand.
Stand, therefore,
with truth like a belt around your waist,
righteousness like armor on your chest,
and your feet sandaled with readiness
for the gospel of peace.
In every situation take the shield of faith,
and with it you will be able to extinguish
all the flaming arrows of the evil one.
Take the helmet of salvation,
and the sword of the Spirit,
which is God’s word.”

Both this passage in Ephesians and the five principles of Sanchin start with stance. In the original Greek, the meaning of the word translated as “stand” is as follows: “To take a complete stand against, to establish one’s position by conspicuously holding one’s ground, refusing to be moved without giving up.”

Your stance is only as strong as your foundation

In spiritual warfare taking a strong stand is important. However, in order to be able to stand well, you have to first back up a step and make sure your foundation is a good one. We all get to choose the foundation upon which we build our lives. In the Gospels, one of the stories that Jesus tells is about two men who built their lives on different foundations. One built his house on sand, and one on rock. You may know how the story goes; the foolish man’s house crumbled when the storms hit, because of its weak, shifting foundation. The wise man’s house, built on a solid foundation of rock, held firm when the storms came.

So what is the strong foundation we’re to build our lives on? In 1 Corinthians 3, speaking about our life’s work in God’s kingdom, the apostle Paul says “For no one can lay any other foundation than what has been laid, that is, Jesus Christ.” Jesus Himself said, “I am the way, the truth, and the life; no one comes to the Father except through me.”

The truth of who Jesus is, presented throughout the entire Bible as the sweeping saga of God’s relentless love of mankind and how far He will go to rescue and restore us to relationship with Himself, is the foundation upon which we stand. It is also the sandals with which we clad our feet to carry that message throughout the world, and the armor with which we protect ourselves so that others may learn it as well.

I recently learned the deeper meaning behind the phrase regarding wearing truth like a belt around your waist and it blew my mind. A more literal translation here is to “gird your loins” – loin here means the hip, or the reproductive area. As HELPS word studies explains, “’To smite the loins’ referred to a fatal blow – ‘forever ending’ anything that would (could) come from the slain.” Do you realize how significant that is in regard to truth? If you do not know the truth yourself, or are led astray from it, you cannot pass it on to other people. Disciples are made through sharing truth, and if that spiritual reproduction does not happen, truth can be lost in a single generation.

Knowing this, Satan’s key tactic is deception through distorting truth. It’s the way he started with Adam and Eve, it’s the way he tried to tempt Jesus in the desert, and it’s the way he attacks you and I today. Jesus defeated his power so that no one ever has to be enslaved to sin again. If we grasp the weapons that Jesus has given us, we can fight against the attacks of Satan, but it takes preparation and practice to utilize these weapons, just as it takes practice to use karate effectively. As 1 Peter 1:13 says, “Therefore, get your minds ready for action [literally “gird the loins of your minds”], being self-disciplined, and set your hope completely on the grace to be brought to you at the revelation of Jesus Christ.”

To ready ourselves for action, we have to spend time intentionally studying God’s Word. Owning a Bible and not reading it is like going to the dojo and watching class from the sidelines the whole time. In a real life or death situation, such a person would be much less effective than one who has been faithfully training.

It’s easy to get complacent, to live on the surface of life, only seeing the bare feet and funny noises, and to forget what’s really at stake. That’s why Sensei has to stop us during class and tell us to visualize our enemy in front of us so we will make every block and punch count. That’s why the apostles urge us to train our minds in truth and be alert, like the apostle Peter in 1 Peter 5:8-9: “Be sober! Be on the alert! Your adversary the devil is prowling around like a roaring lion, looking for anyone he can devour. Resist him, firm in the faith, knowing that the same sufferings are being experienced by your brothers in the world.”

Taking your stand on the foundation of truth about Jesus is the strongest and safest way to live. The prophet Daniel summarized well the character of spiritual warriors when he stated this about a future time, during which there will be intense spiritual warfare: “But the people who know their God will be strong and take action.”

Choose your foundation well, and take your strong stand. There’s a lot at stake.