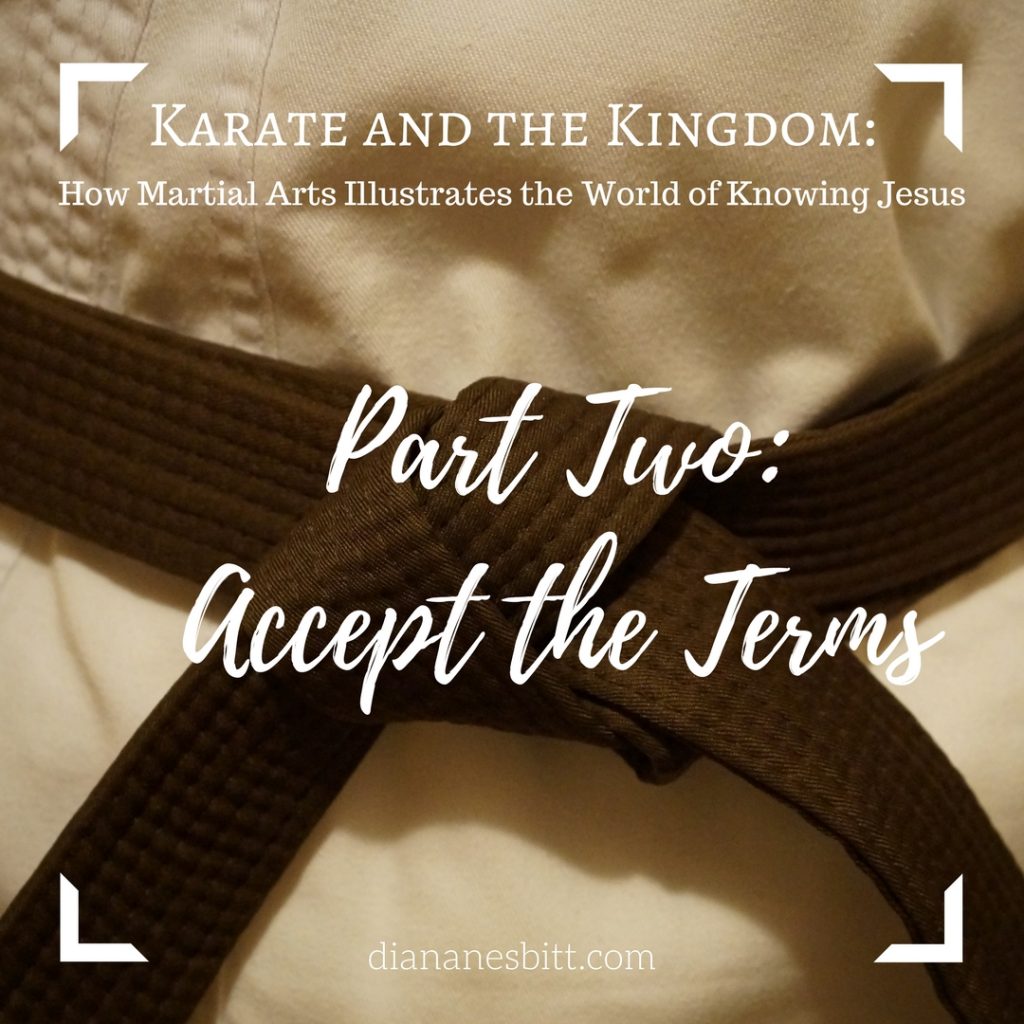 I couldn’t quite believe I was there, sitting across the desk from the owner of the dojo, signing up for karate lessons. I had no great, specific reason why I was doing this; I only knew I had enjoyed my free month of classes, I could use some adventure in my life, and I’d prayed about it and felt okay with saying yes. Sensei read off a list of terms for joining the dojo, and asked if I disagreed with any of the statements. They reflected good basic morals; I had no issues with them. I signed my name at the bottom of the paper, agreeing to pay the monthly rate for the next twelve months. I was officially a karate student.

There are many areas in life that require us to accept certain statements in order to receive access to something we want. If you’ve ever tried to install software on your computer or join a service online, you’ve probably clicked a box that says you agree to the terms and conditions for using that software or service so that you can click the “continue” button and move on.

Just like there are terms for things like joining karate or signing up for Gmail, there are terms for entering heaven. And just what are the terms? They are simple, really. All you have to do to get to heaven is to be perfectly righteous – never having broken a single one of God’s laws.

Unless you have pretty seriously disillusioned yourself, it’s not too hard to admit that at least once in your life, you’ve done something that could be counted as wrong. Two short verses in the book of Romans clearly state that we all fall into this category of being sinners: Romans 3:10 says “As it is written: There is no one righteous, not even one,” and Romans 3:23: “For all have sinned and fall short of the glory of God.”

I once heard a pastor share an illustration his mother used to teach him about the pervasive nature of sin. She took a glass of water, added a drop of toilet water (not the kind that smells pretty) to it, and asked him to drink it.

“Why? It only has one drop of toilet water in it. The rest is fine.” She replied.

He got her point. There are no gray areas here. Even one “little” sin makes you a sinner, and God cannot allow sin in His presence. He is holy, absolutely free of sin. The contrast between our sinfulness and God’s holiness is so great that as humans with sinful bodies, we would literally die if we were exposed to the full brunt of God’s glory. (Exodus 33:20)

As we said before, sin is missing the mark, and sin breaks our relationship with God, leading us to eternal separation from God if we do nothing to repair our relationship with Him. But God couldn’t leave His creation hopeless, doomed to an eternity in hell without a chance at redemption. His justice demanded that the moral debt of sin be paid for with blood – a life for a life, so to speak – but His mercy would not allow us to be destroyed without hope. So He sent His Son, Jesus.

Jesus, who was fully God and fully man, came to earth and lived a sinless life. Even though Jesus was the Creator of heaven and earth, He allowed Himself to be nailed to a cross and crucified. Because He had never sinned, His innocent blood sacrifice fulfilled the demands of God’s justice. Through His death, the full price of our sin was paid. Three days later, God raised Jesus from the dead, defeating the power of sin and death once and for all. Jesus died – was separated from His body – and was restored to life, so that we have the chance to never be separated from God again. To accept these terms and receive the free gift of eternal life offered us through Jesus’ sacrifice, all we have to do is believe that we are sinners and that Jesus paid for our sin. Then God counts our faith as righteousness – the righteousness that is necessary to enter heaven. As another verse in Romans states: “For the wages of sin is death, but the gift of God is eternal life in Jesus Christ our Lord.” (Romans 6:23)

Here’s one way I like to explain how this works: imagine that in order to gain entrance into a dojo, you have to get a pure white gi. However, the only way to get that gi is to perform San Sei Ryu, which is the longest and most complex kata in Uechi Ryu karate. You’re not even a white belt, so this is completely impossible for you to do. However, the sensei of the dojo agrees to perform the kata for you, and if you believe that he is willing to do this for you, he will accept his own kata as payment for your gi. You can then have the gi and get into the dojo. That’s like what Jesus did for us, only on a much grander scale at much greater cost to Himself.

As the Creator and Sustainer of all life, God yields far more power than a sensei in a dojo. If we want to repair our relationship with God and receive His gift of eternal life, we can’t get that on our own terms. We have to come to God His way, not ours.

Jesus said, “I am the way, the truth and the life. No one comes to the Father except through me.” And in Romans 10:9-10 & 13, Paul says, “If you confess with your mouth ‘Jesus is Lord,’ and believe in your heart that God raised Him from the dead, you will be saved. With the heart one believes, resulting in righteousness, and with the mouth one confesses, resulting in sanctification…for everyone who calls on the name of the Lord will be saved.”

When I signed that paper committing to a year of karate classes, I really had no idea what was in store for me – the friends I would meet, the strength of body, mind, and spirit I would attain, the way karate would seep into my blood. Even more so, we cannot imagine the amazing, real life that God has in store for us when we choose to accept His terms and receive Jesus’ gift of salvation. If you’ve never taken that step, I encourage you to talk to God about it. Tell Him you know you’ve sinned and you can’t get to heaven on your own terms. Ask Him to forgive your sins and heal your relationship with Him. It’s truly that simple. And if you don’t feel ready to accept God’s terms yet, talk to Him about that too. Just ask Him to tell you what He wants you to know about Him. Ask Him to help you understand. He promises that we will find Him when we search for Him with all our heart (Jeremiah 29:13).
Stay tuned for the next post, when we’ll be talking more about who God is and why He gets to make the rules.