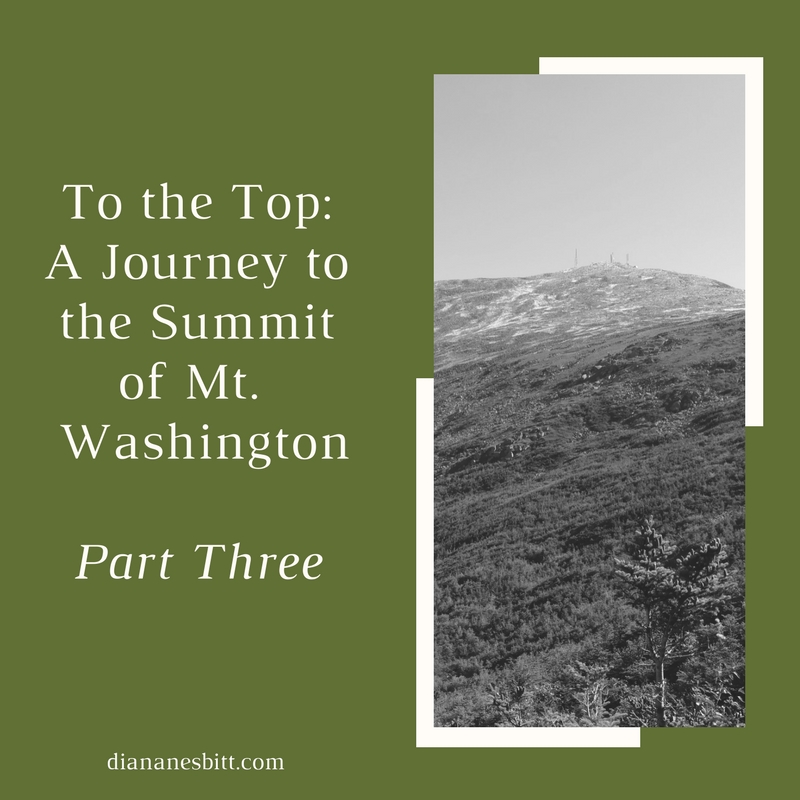 A bustle of activity surrounded the Lakes of the Clouds hut. Hikers milled around, all either arriving, resting, or leaving.
“Huh, I wonder where the lakes are?” I queried aloud, looking around us. Nothing even resembling a large puddle presented itself, contrary to the name of the place and the video I had watched the day before.
“Maybe you were hallucinating,” Debbie teased.
“No, there was a really pretty pool. This guy took a video of his wife standing in front of it.” I defended my sanity. Puzzled, we continued on.
We rounded the corner to the front of the hut and entered the wooden building. An information desk of sorts stood on our right, with a large common room straight ahead. Wooden planked walls gave the simple room a warm and inviting look. A table of baked goods for sale – large servings of scones, brownies, and coffee cakes for $2 a piece – and mugs for tea or coffee stood just before the long tables and benches where hikers could sit and eat. We made our way to an empty table, pulled a bench out, and removed our packs. The air temperature in the building was unusual – although it didn’t feel very cold, I could see my breath in front of me. 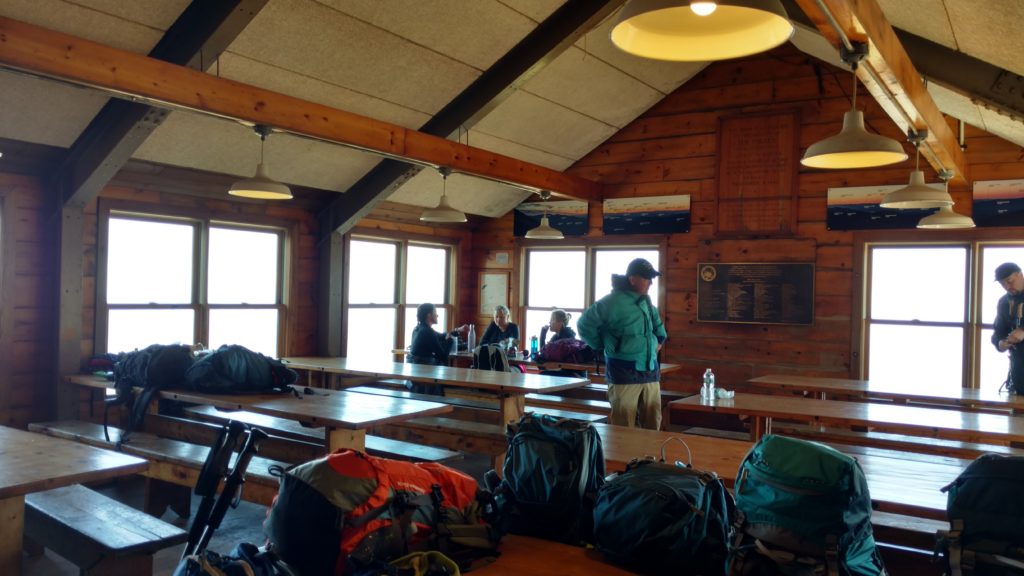 “Look, there’s steam rising from that guy’s back over there!” I pointed out quietly to the group, then we laughed when we saw it rising from each other’s backs too.
First on the list, a trip to the bathroom. On our way we could see a room where there were bunks for hikers who had booked their lodging far in advance – not something I would choose to do in a climate as unreliable as this. However, it was easy to see how running water, shelter, and amenities usually taken for granted made the simple accommodations seem like a hiker’s paradise. The most pressing need taken care of, we gave our tired legs a rest, refueled with some snacks, and discussed our plans to hike Mt. Morgan. Wendy hadn’t been sure if she’d come with us, wanting to save her knees for the rest of the hike up Mt. Washington. However, Debbie talked to a woman at the information desk and found out that we could leave our packs at the hut during our hike up Mt. Morgan. Since that would make the trip easier, Wendy decided to come. 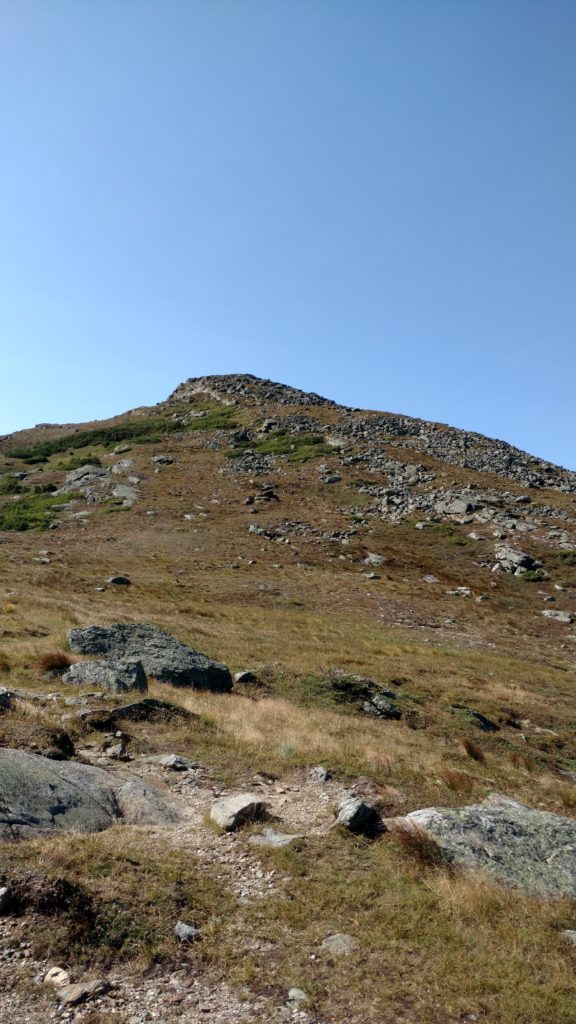 The path up the face of Mt. Morgan was steep, requiring us to climb up the rocky face on narrow ledges here and there. Debbie and I tested out our trekking poles for the first time. Using them felt awkward at first, but we would be grateful for the extra stability on the way back down. As I carefully placed my hands and feet to scale the steep part, I was thankful to be free from the backwards weight of my pack. Partway up we found half-melted ice rime still clinging to the shaded parts of the grass and rocks, proof of the wintry conditions that had prevailed here just hours ago. As we gained elevation, I looked back and saw one of the “lakes” that gave the hut its name.
“Aha! There it is!” I pointed out a small blue pool just beyond the other side of the hut. 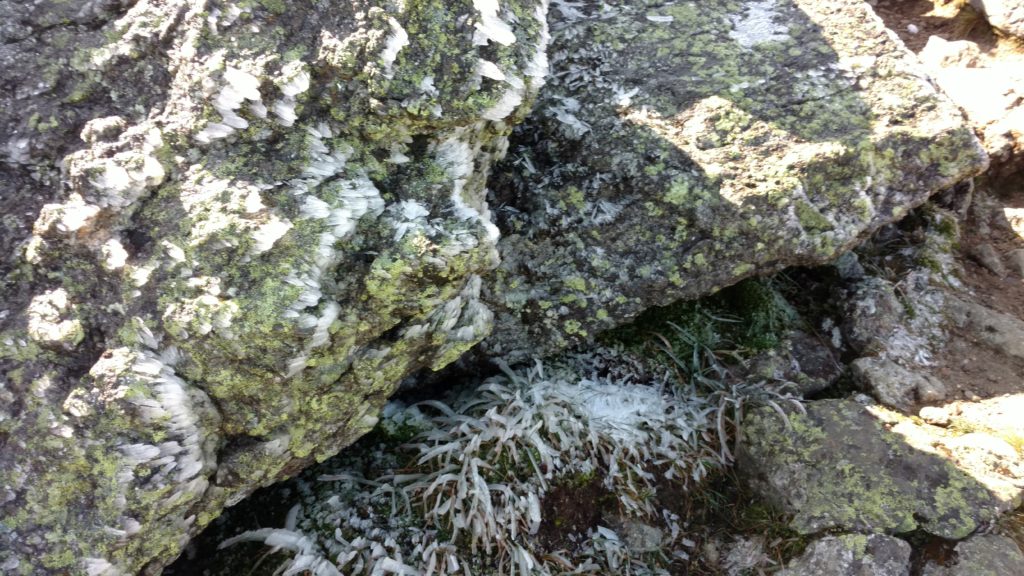 Before long we had made it to the top – my first 4,000 footer. We waited for a group of young people taking photos at the summit, and then it was our turn to plant our feet around the summit pin and take a photo. 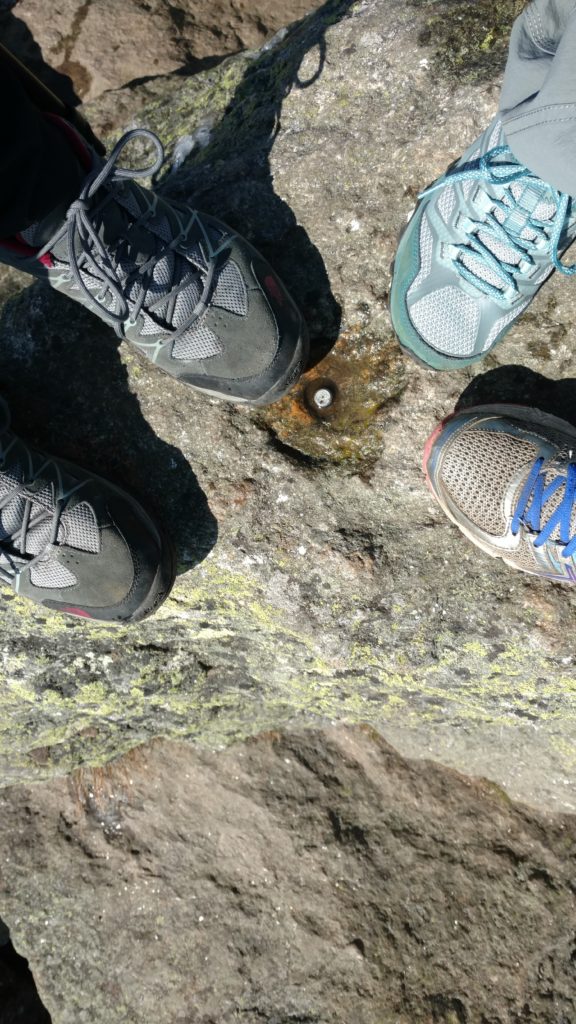 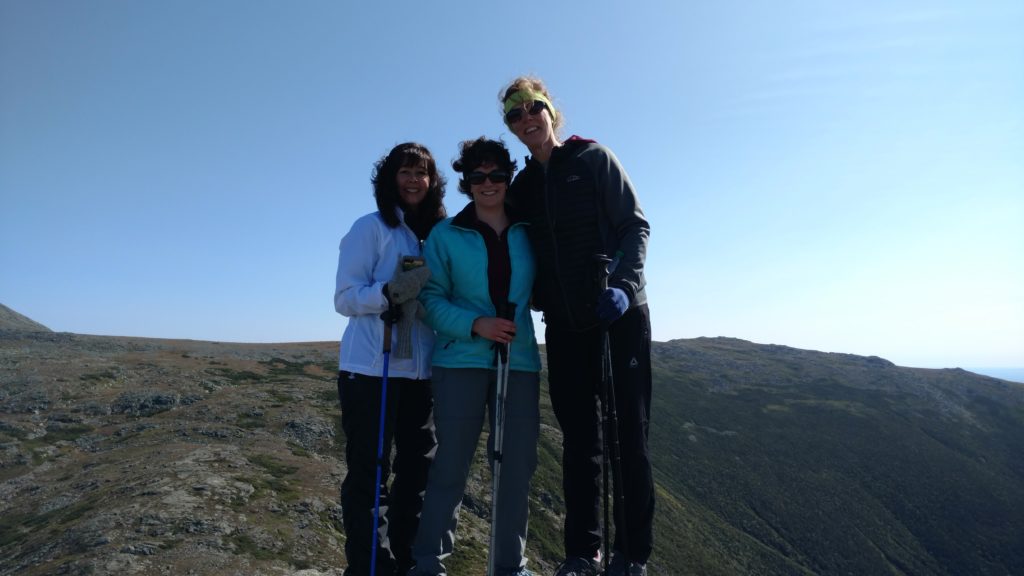 A friendly couple arrived at the same time, and as we took pictures for one another we discovered they were also on their way to Mt. Washington. We celebrated the first success of the day, exhilarated at how far we had come and the surreal beauty that surrounded us on all sides. The sun was warm and the breeze light, making us shed the coats and hats with which we had so carefully prepared ourselves. We chose to descend the same way we had come instead of taking the other side of the loop trail since it was a more direct route. Coming down the face of the mountain was a little tricky, but we made it safely and were soon back to the hut. 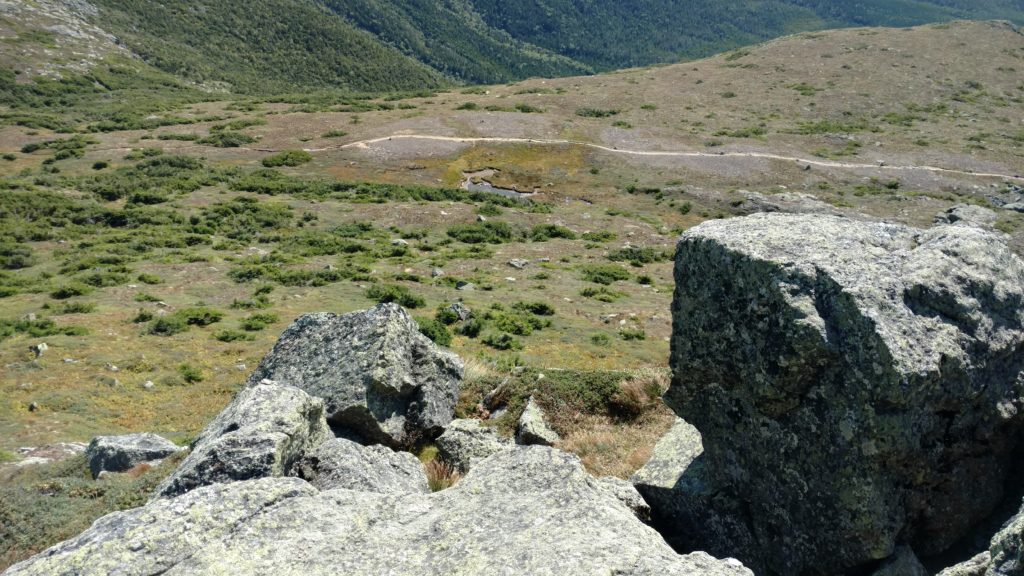 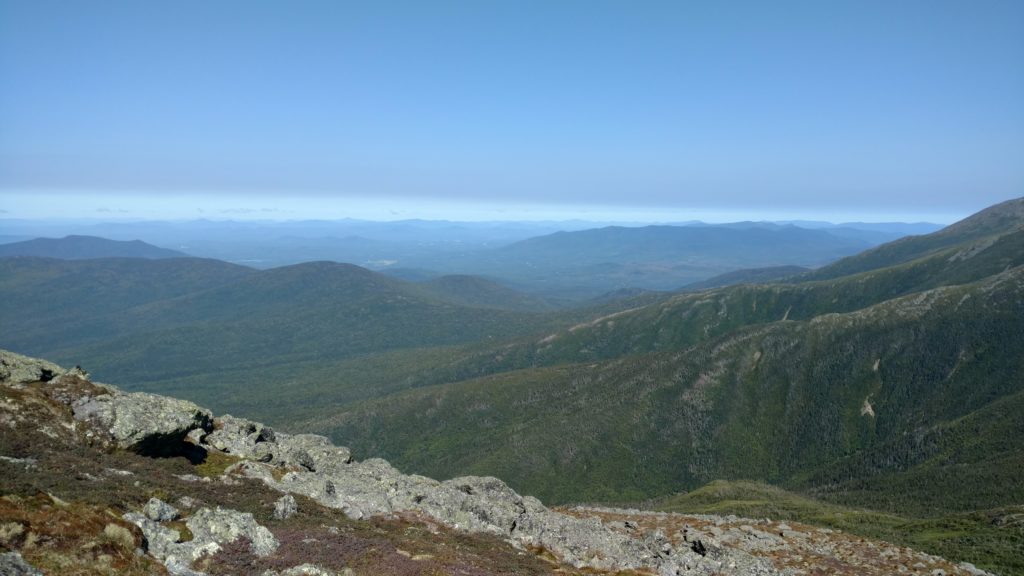 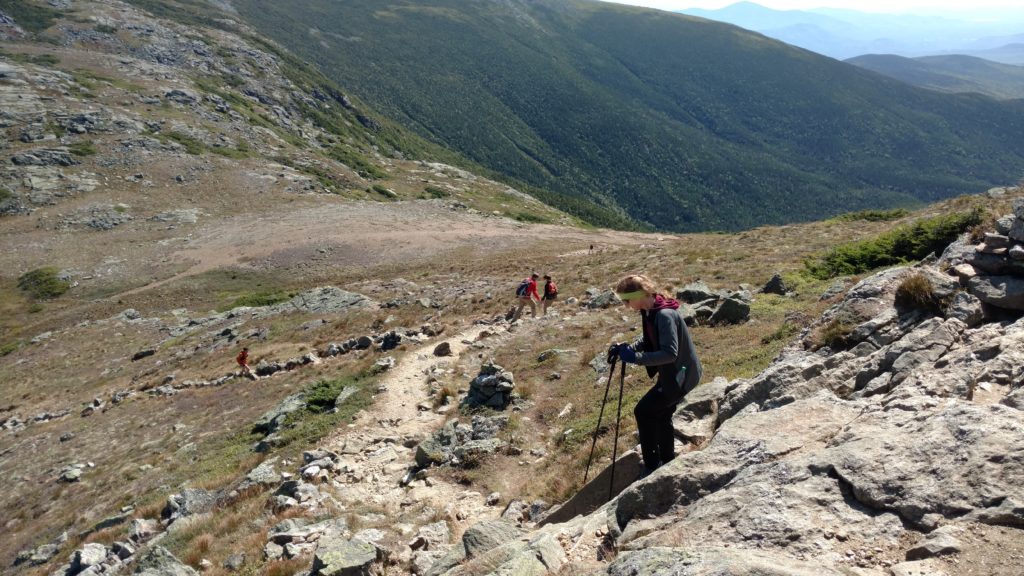 Before we left, I wandered towards the front of the common room in the hut. A large plaque recognizing the World War Two sacrifice of one of the hutmasters hung on the wall, flanked by diagrams of the surrounding peaks that could be seen from this vantage point. I read the plaque and began to wonder about the stories that these walls had witnessed over the years. 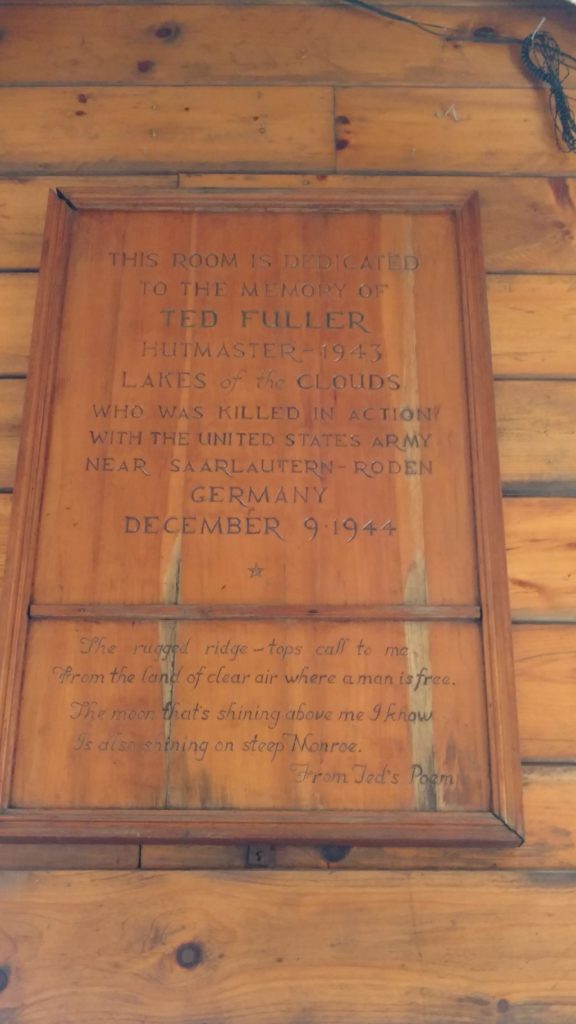 At the other end of the room a poster describing the constellations that could be viewed from this vantage point at night stopped me in my tracks.
“Can you imagine looking at the stars from up here?” I asked my companions. The thought of viewing the night sky from the top of a mountain, far away from manmade light, filled me with awe. I hadn’t even finished one bucket list item and another one had already made its way onto my list.
We packed up our gear and headed out of the hut, our goal directly ahead of us. Only 1.5 miles of the upward hike remained. The final stretch was really here. 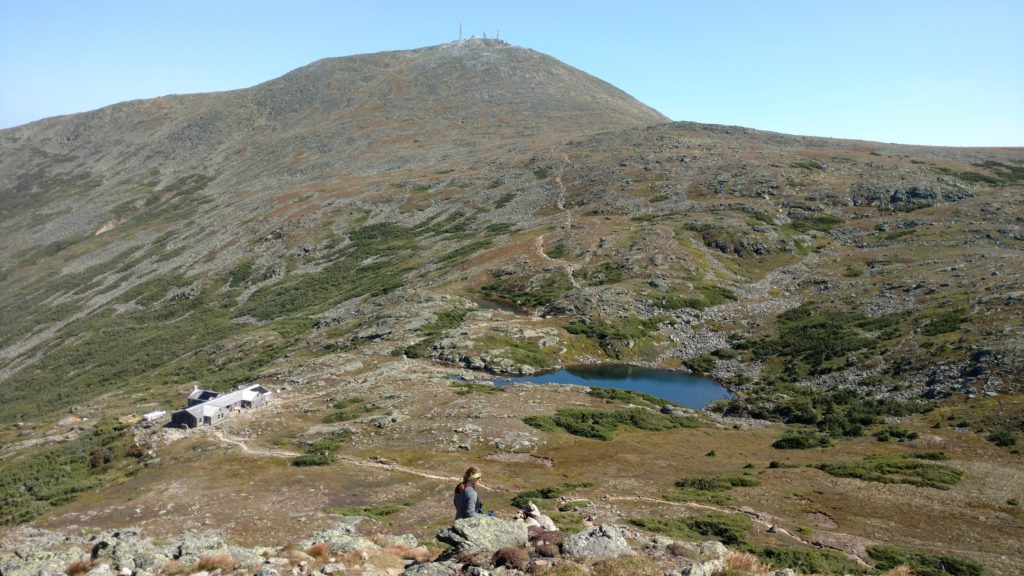