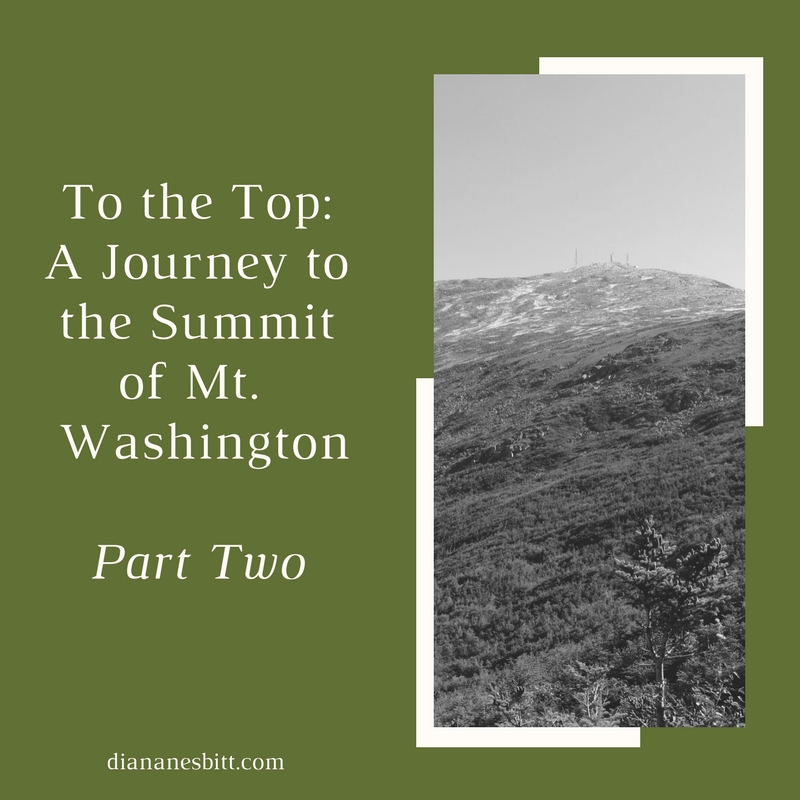 I slowed the car and Debbie leaned out the window to ask a couple of hikers if this was the correct parking spot for the Ammonoosuc trailhead. They confirmed that we were in the right place, so we parked and gathered ourselves together for the adventure ahead. After a few stretches and an inaugural trip to the woods, we read Psalm 121 together:

I lift my eyes toward the mountains.
Where will my help come from?
My help comes from the Lord,
the Maker of heaven and earth.

The Lord protects you;
the Lord is a shelter right by your side.
The sun will not strike you by day
or the moon by night.

We stood in a close circle and prayed, asking God to protect us and bless our day. We could not have imagined the many gifts He would heap upon us in the hours ahead. 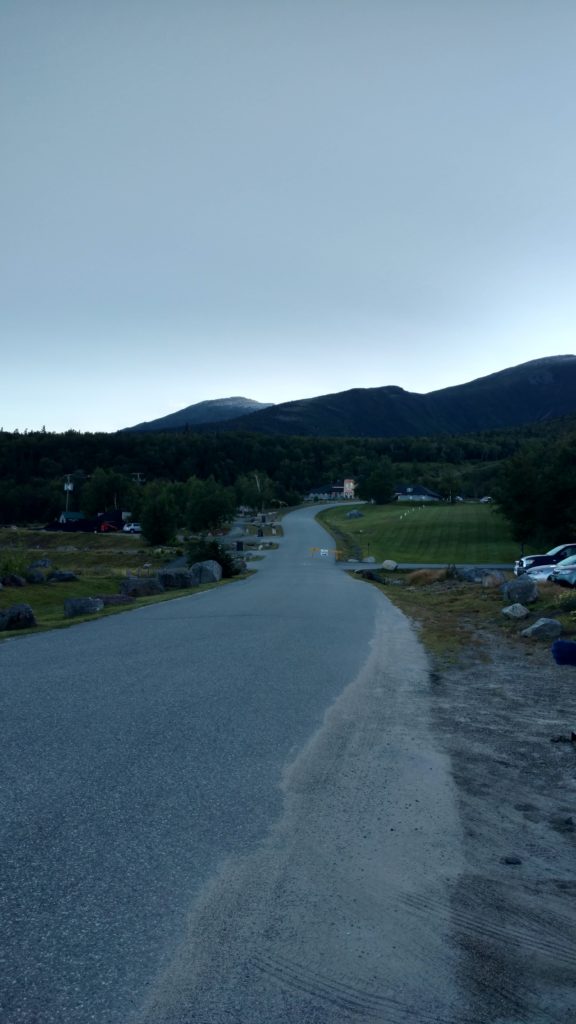 The chilly morning air invigorated us as we climbed up the paved driveway, getting used to the weight of our packs. I pulled out my phone to snap a few pictures and document the start of our climb. 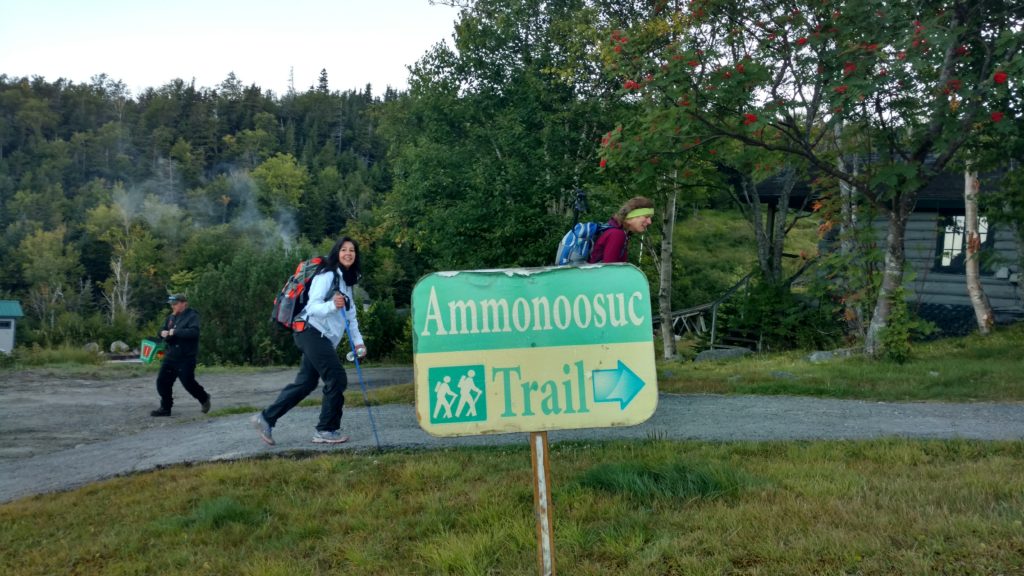 We stopped at the trail map to check our route. Debbie said that someone had told her Mt. Morgan was only a third of a mile out of the way, so if we made good time, we could drop over and hit that summit as well, adding another 4,000 footer to our list (my total was at zero, theirs was at two or three). 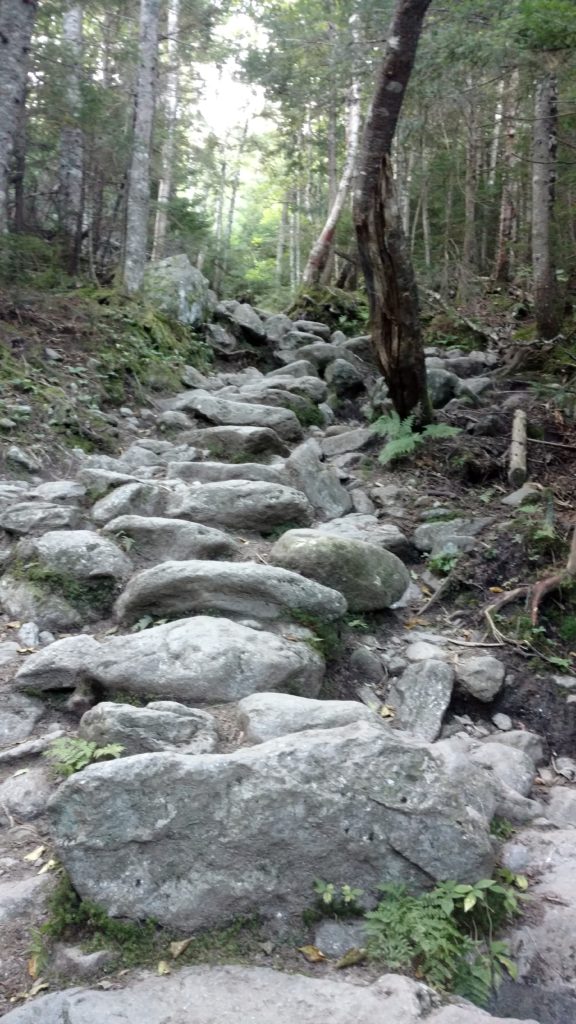 The trail began at an easy ascent with plenty of rocks to step around, following the path of a small stream splashing over mossy green rocks, which we would follow for two-thirds of the way to the top. Soon we reached a narrow bridge made of a few wooden planks sided by one railing. A pool fed by a small waterfall lay about 6 feet below us. 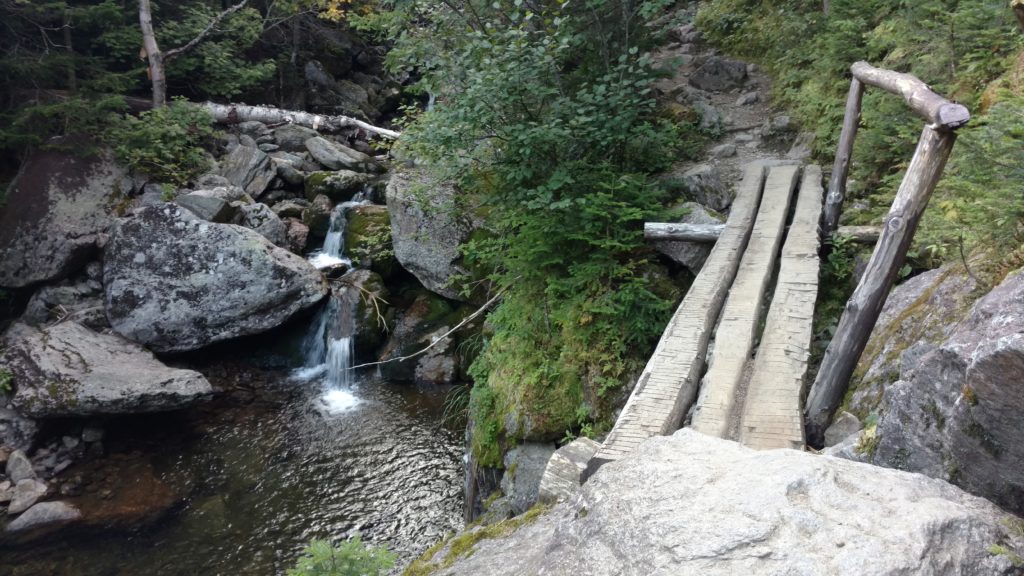 “I wonder if this is the Gem Pool,” I said, looking at the watering hole. “From the pictures I saw, I thought it would be bigger.”
We agreed that it was pretty, albeit not quite what I expected, and continued on our way. After a while, we came to the real Gem Pool. Round and shallow, like a flat gemstone, the pool of crystal clear water filled a small rocky basin in the middle of the woods. A waterfall, slightly larger than the one we’d seen before, poured into the pool on the opposite side of the trail. This was what I had expected. 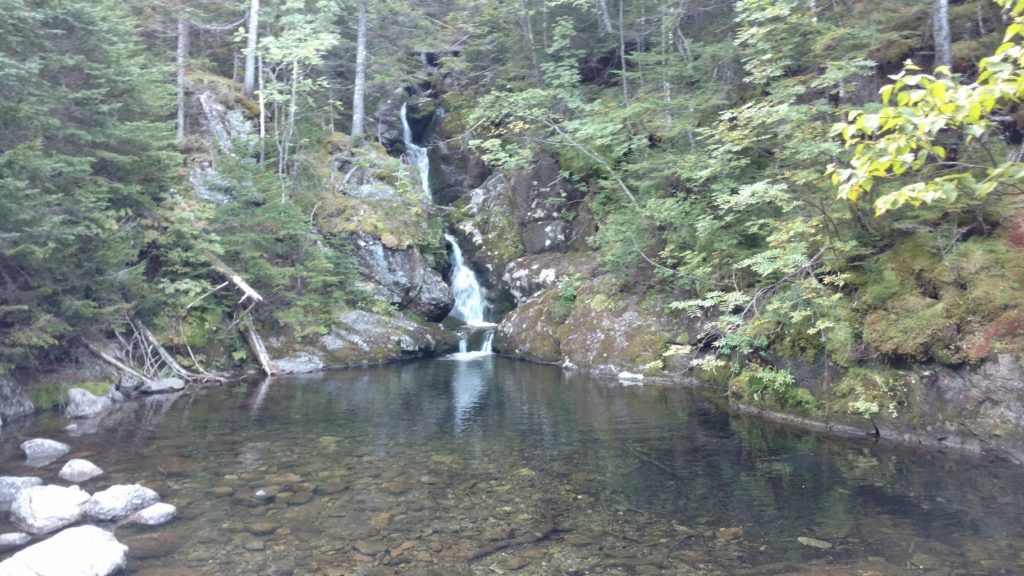 We stopped for a few minutes to take in our surroundings. The trail we had been following with the stream to our left gave way to rock walls many feet over our heads on the right. We pointed out a cleft in the rock, where it would be ideal to find shelter in inclement weather – or a good den for mountain lions. Green pines, brown logs, and grey rocks, with a touch of rusty red moss here and there, formed the subtle palette of the woods. The sun had not yet broken through the morning clouds, but the morning air was losing its chill. We crossed the stream on rounded rocks at the end of the pool, following the trail with the stream now to our right. After we crossed to the other side, the trail became noticeably steeper. The real hike was just beginning. 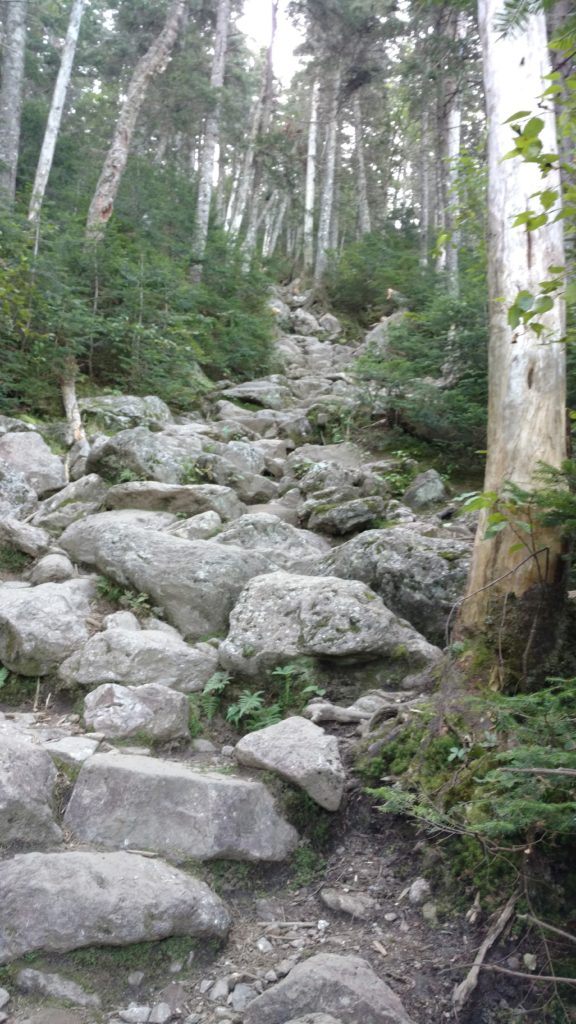 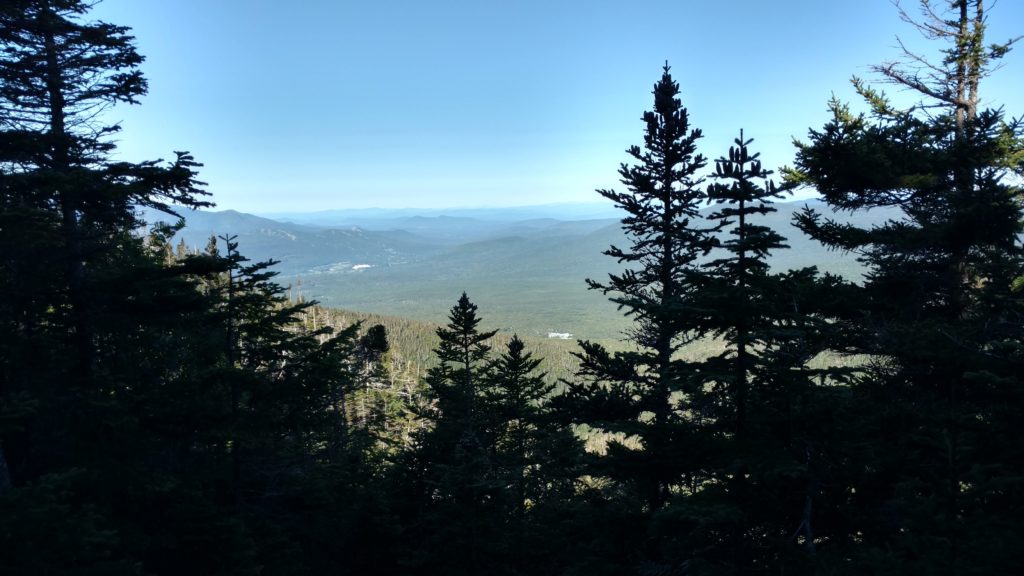 As we gained elevation along the trail, glimpses of the view rewarded us for our effort and encouraged us to keep going. After a little more climbing, we decided to take our first break. We found a spot with a couple of good-sized rocks on which to rest. Debbie stood across the trail from me as we chatted for a moment, her back to the edge of the trail, which sloped steeply downward into the trees rising up the side of the mountain. In mid-conversation, she started to lose her balance and tip backwards towards the slope, her pack making it more difficult to regain her balance.
Arms flailing in circles, she reached out for me.
“Diana!” I reached out and grabbed her hand, and much to my surprise and delight, my karate training kicked in. I engaged my core and sunk into a stronger stance as I pulled her back into balance.
“Hey, I just used my karate there,” I said.
“Yeah, you hunkered right down, didn’t you?” She said. “I don’t know why I reached out to you like that. ‘I’m falling, let me take you with me!’” We chuckled and Debbie came over to the safety of the opposite side of the trail. It was nowhere near as exciting a rescue as Emperor Kuzco rescuing Pacha from the “crumbly canyon wall” in The Emperor’s New Groove (points if you comment with the lines from his victory dance!), but a tumble backwards into a stand of trees probably wouldn’t have added a lot to the fun of the day.

Farther up the trail we reached another beautiful spot where the flat stream turned into a continuous waterfall. Warm sunlight had burned the fog away and now filtered through the trees, highlighting parts of the stream. We paused for another group photo, then climbed higher until it was time to cross the stream again.

Shortly after this, another change in elevation became apparent. Deciduous trees gave way to aromatic balsam fir, heavily decorated with gray-black pinecones standing atop their uppermost boughs. Sloped rocks with footholds chiseled out required the use of both hands and feet to ascend, and we started to gain a taste of the rocky terrain that would gradually introduce us to the climax of “The Rock Pile.” Breathtaking views awed us more and more frequently as we drew closer to the treeline. We looked at the ridge across the ravine and speculated if that was the Jewell Trail, which we would travel on our descent. 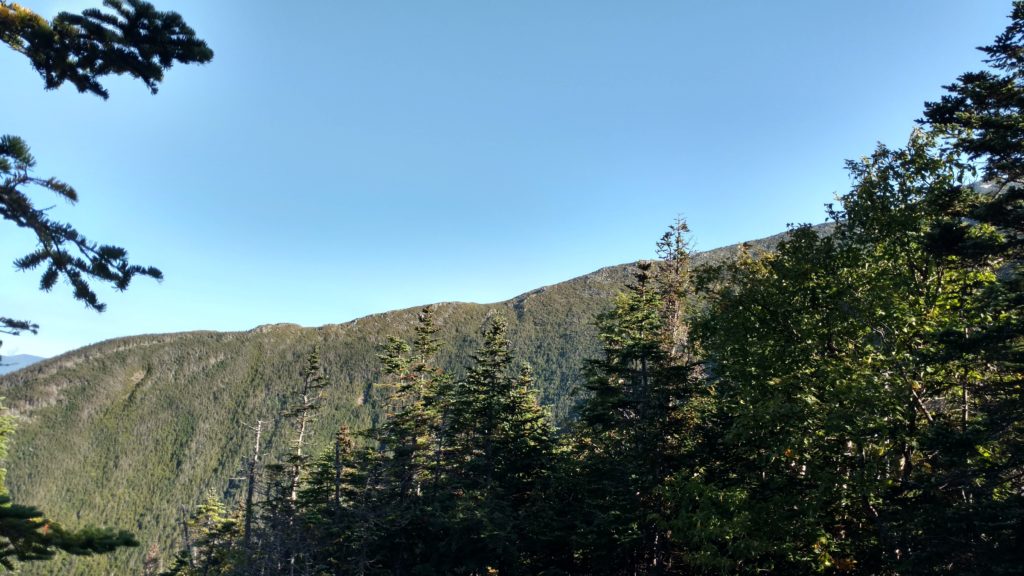 It was barely 9 or 10 o’clock, and we met a young couple coming down the mountain, dressed in gloves and winter hats – a contrast to our t-shirts and bare heads. They had just summited Mt. Morgan.
“It’s really windy up there,” they reported. “You’re going to want to wear your warmer gear when you get there.”

On and on, we pressed our way upward. Signs for the Lakes of the Clouds hut spurred us forward. The firs became bent and mangled, signs of the harsh weather that prevails on days more characteristic of the mountain than this clear one. Their height dropped below our waists before surrendering to the hardy brush and grasses of the alpine region. The trail leading to the hut began to switchback and we followed the winding path upward, Mt. Morgan rising up to our right and Mt. Washington still looming over our left. We were so close, and yet so far.