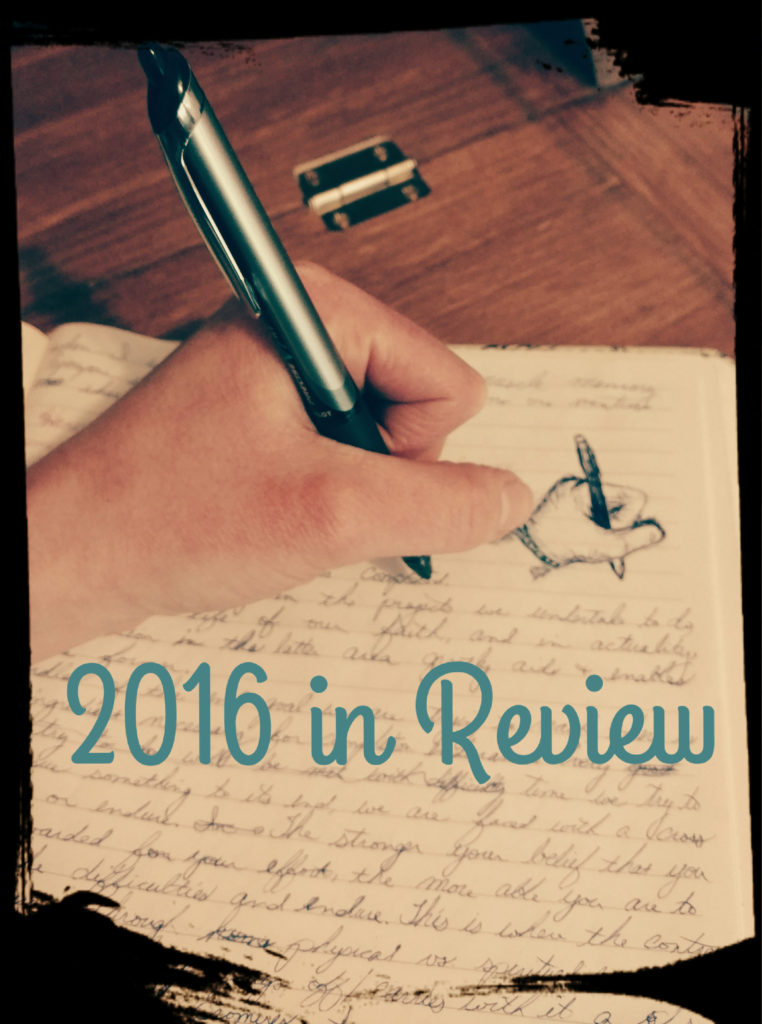 The wayward writer has returned yet again. It’s been a coon’s age since I last posted (although I can’t say I actually know how long a coon’s age is – I assume it could be quite a while), so as a way of saying hello again, I’ll share my review of the past year as a quick, although not very brief, commentary on what has been keeping me busy and away from the writing desk over the last several months!
2016 was a full, interesting year. It brought new opportunities and open doors, some unexpected and some I’d hoped for but never expected this year to bring. I made some new friends and had relationships with others deepen in sweet and special ways. In 2016 I asked the Lord to give me a phrase to help me stay focused, something concise that would remind me of the intentions with which I began the year. He gave me the word finish. It was appropriate, because I have many half-finished projects, crafts, and online classes frequently haunting the back of my mind. This word served well to motivate me toward completing some of these projects. Later on, though, it seemed to apply to not just my projects, but perhaps also to some part of this time in my life. Doors have opened this year, and I’m curious and also a little bit apprehensive to see what the continuation of stepping through them brings in 2017.
January: My first step forward in 2016 was getting my passport (no, I haven’t used it yet). I was hoping to go on a mission trip this year and wanted to have my passport in case an opportunity should arise. I seriously considered a trip to Jamaica, but ended up deciding it wasn’t the right trip for me. However, it was not a wasted opportunity, because through that connection my mom was able to send some dresses and shorts for children that she had made (you can read about that project here) with our friends who were going on the trip, and they were able to distribute them in an impoverished community down there.
March: I started taking a karate class! My coworker had been taking classes for over a year (and telling me how great it is), and she had the opportunity to bring a friend for free for the month so she invited me. I’d always thought it would be cool to learn some self defense but never dreamed I’d actually have the opportunity, so I tried it out and decided to stay on as a student. I’m growing to like it more and more as time goes on. I earned my green belt in early November and am currently working towards my first brown stripe (after two brown stripes comes my brown belt, then three black stripes and my black belt – still a few years down the road but not out of sight!)

May: I took English composition as my first-ever college class online from a local college. It was a good experience, but not without stress, since it was an accelerated course in which we covered a semester’s worth of work in eight weeks (I didn’t really know what I was getting myself into…), but I received some really helpful guidance from a good friend along the way and that helped me survive. 🙂 The major assignments were a personal narrative essay, a critical analysis, and a research paper. I used each of the assignments to bring to life some ideas that I’d had in my mind for a while, so that made each one even more satisfying to complete. I wrote about my memories of going to the town library for the personal narrative essay, analyzed the plot structure of a Pixar movie (I chose Inside Out – so much fun!) for my critical analysis, and wrote about human trafficking for my research paper. I received some very encouraging feedback from my professor on each of my assignments and overall I enjoyed my first college experience.

Summer was busy and stressful, with trying to keep up with gardening and yard work and karate and more hours at work. We had more staffing changes at work, so my hours increased and for a few weeks things were pretty intense with trying to fill in the gaps and regroup before new people came on, but we all survived, are now fully staffed, and there is an air of relief and fun now permeating the office. One of our new team members is a friend I’ve known for years, so that made it even more exciting. In July, I also had the opportunity to help a friend set up floral arrangements for at a historic estate for a wedding, which was fun.

In November (at the persistent coaxing of my coworker – I asked her a year ago to prod me to do this, and she made good on it!), I tried out for a community production of Fiddler on the Roof at the university in town, and I made it in! In addition to the fact that I’ve always loved all things musical, part of my reason for auditioning was to use the experience of being in a more serious theatre production as a springboard for my research for my novel, which involves summer stock theatre.
Later on in the month, we had a lovely Thanksgiving, spending the evening enjoying dessert and good conversation with friends.
Then December came. Oh, December. 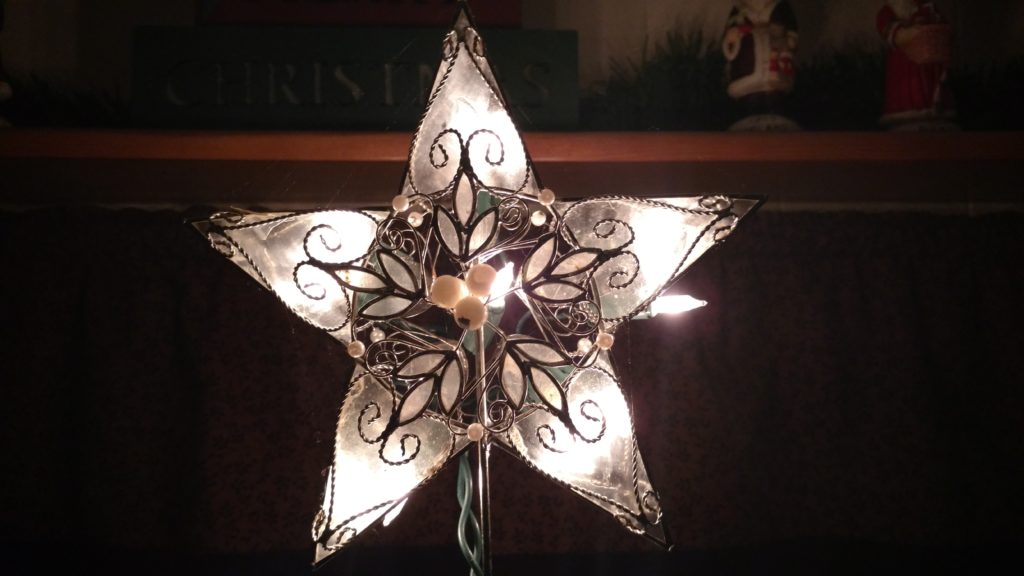 What I wanted most for December was for time to slow, to allow me to savor this last bit of my year of “finishing,” to steep my mind and heart in worship and meditating on the birth of Christ. I wanted to finish learning the beautiful arrangement of Silent Night I’d played off and on for months and play it at church. I wanted to watch Christmas movies and wrap gifts and write things.

Instead, after a week of puzzling and intense pain in his lower abdomen, my dad went to the doctor and from there to the ER on December 9th. They took a CT scan and diagnosed it as an abscess in his psoas muscle. Apparently an abscess like this is very rare, and the doctor shook his head in bewilderment as to why Dad would have even developed such a thing (although we think it might be related to the appendectomy he had two years ago). They transferred him to Dartmouth that night and put drains in his abdomen. When we got there on Saturday they had just put the drains in and some of the infection had spilled into his abdomen (which can happen in these types of procedures) and he was very sick. They transferred him to the ISCU and thankfully by the end of the day he looked better, and the next day he was able to be moved back into a regular room.

He came home the Wednesday of the following week, and for the next two weeks Mom had the fun job of emptying and flushing his drains every day. Although anything medical is NOT her forte, she was a trooper and took good care of him. So, we were all quite happy when Dad came home from his follow up appointment and, with the biggest smile he’d worn all month, announced that the doctor had taken the drains out! After twenty days with them in, he was delighted to be free of them and able to wear jeans again.

December did have some good points, though: I turned twenty-five and got my first smartphone. 😉 Also, I got new tires. Funny the things you get excited about when you become an adult.

January: After a Christmas season that passed in a way none of us were really expecting, I savored my vacation from work the week after Christmas. I hung on to the last days of the year like an oak tree to its leaves, but time, like the wind, pulled them away from me, one by one. Then January came, and I began one of the most hectic months of my life. Fiddler on the Roof rehearsals took place every day for 18 days, culminating in a total of nine (9!!) shows over the course of two weekends. It was an intense schedule, but it was a lot of fun, especially after the shows began and everyone felt more comfortable with what was going on.

On January 1st, my family attended a local church that we had not been to before, and thus far, we are really enjoying it. I even have some hope that this may become home.

I also started (and stopped) my second college class at the beginning of 2017. My plan was to take English Composition 2, but after sitting in class for the first few weeks, I discovered that what the professor was teaching and what I had expected to learn from the course description were not matching up. So, after much mental struggle, I decided to drop the class and invest my time in more practical writing experiences – like resurrecting my blog and working on my novel. I just signed up for an online fiction writing class for the month of March and am excited to see what will come from that.

When I look back on a year that has passed, the most important thing that I consider is how I’ve grown spiritually. Over the year of 2016, I came to realize more and more the relational aspect of God’s character, and how much there is that He wants to give us spiritually. I’m just starting to learn to interact with the Lord a bit more as I pray, instead of always throwing my list of “Please helps” at God and expecting Him to listen, and I hope that 2017 brings much more of that.

Now as I look forward to more of what 2017 holds, I have delicately held hope that finally, this may be the year when I take serious steps forward in pursuing this calling of being a writer that God has placed on my life. Over the last month, I have come to realize that He has already answered my often-asked question of “How do I become a writer??” I’ve learned a lot from the research and reading I’ve done over the past few years, and I know the basic first steps that I need to take to pursue this craft. My main desire is that I will do this in strong, humble dependence on the Lord and will seek and recognize His help every step of the way.