I have been doing an inductive Bible study on the book of Matthew, and I thought it would be a good exercise to write about the truths that I glean and the principles that stand out to me as I study. So, here is the first of my Matthew Musings. 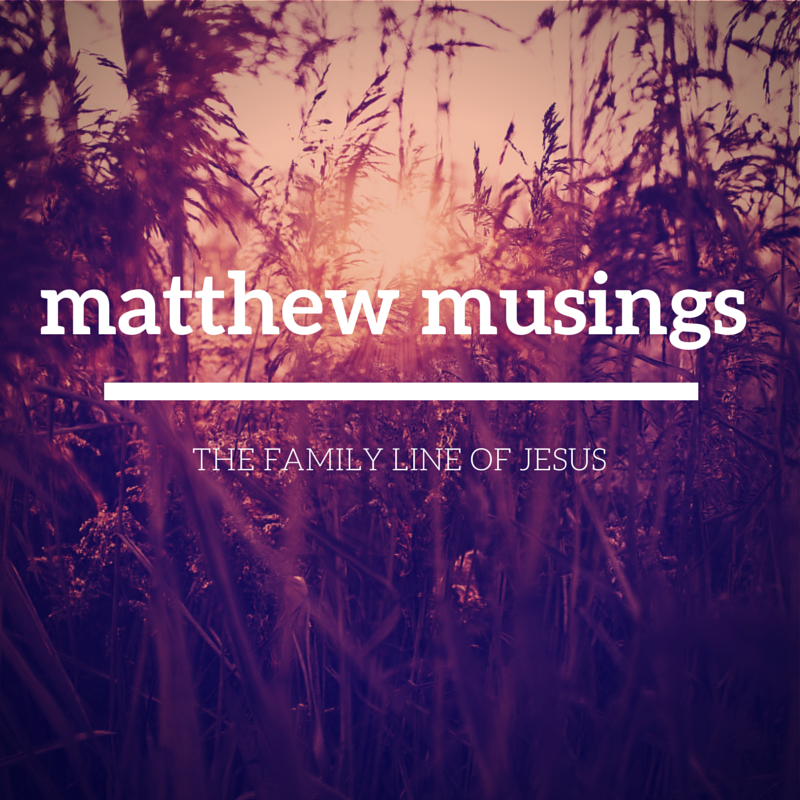 Matthew begins with a genealogy, which is not typically the type of passage we consider the most scintillating in the Bible. But this genealogy is scintillating (sorry, I like that word). Look at the people that Jesus, the Creator and Ruler of the whole entire universe, chose to have in His family tree. Right away we can spot a prostitute and an adulterer, who also killed the husband of the woman with whom he committed adultery. And, if you’ve ever happened to come across a rather sordid account back in Genesis, dropped right in the middle of the story of Joseph, about a woman disguising herself as a prostitute, getting pregnant by her father-in-law, and giving birth to twins…well, she’s in there too.

Centuries before He’s even born, Jesus shows us how humble and gracious He is by the people He allowed into His family tree. In His love, the pure, untainted Son of God chose to come to earth. He chose to associate with broken, messed up sinners, and not only to associate with them, but also to call them His family.

But His humility didn’t stop there. Even though He had the pick of every human being who ever walked the planet to be in His genealogy, He didn’t choose a pristine family line of priests and religious leaders (not that He could have found a pristine family line if He’d wanted to. None exists, because genealogies are a line of people.) He didn’t even choose people who were, relatively speaking for the human race, respectable. Because that’s not what Jesus does.
He chose them all- faithful and unfaithful alike, all given the opportunity to know and live for Him; some accepted Him, some rejected Him, all were loved by Him. He chose the outcasts, the misfits, the godly kings, the evil kings…He chose people from every possible walk of life to be in His family tree. He gave them all the honor of being recorded for all eternity as ancestors of the King of kings.

Yes, this genealogy gives us a clear example of Jesus’ graciousness. But that is not the only attribute we witness here. His holiness and righteousness are also clearly visible. God does not brush sin under the rug, and even in something as brief as a genealogy, we are reminded of the permanent consequences of sin. You can see it right there in verse six- “And David fathered Solomon by Uriah’s wife.” God did not approve of David’s actions with Bathsheba, and He’s keeping the record clear and straight on that for all eternity. David took another man’s wife. It doesn’t matter if David conveniently removed Uriah from the picture and married Bathsheba later. He committed adultery with her, and they lost the first child they conceived together because of their sin.
But David repented. You can see the depth of his sorrow over this sin in Psalm 51. He acknowledged that he had sinned against God. He didn’t call God unfair or mean for allowing him to suffer the painful consequences of his actions; rather, he said “You are right when You pass sentence; You are blameless when You judge.”
And then, the beauty from the ugliness, the proof of the overflowing mercy of God: He let David have another child with Bathsheba- and this was Solomon, the heir to the throne, the son who would be part of the Messiah’s family tree.

Sin, repentance, mercy. This is why Jesus came. The whole story is there in the genealogy. Sin, repentance, mercy. We sin, we suffer consequences, and if we repent and stop doing the sin, in His mercy, Jesus forgives. Our sin causes Him pain and caused Him to suffer more than we will ever comprehend. Yet He still forgives when we truly repent. He lets us take part in His story. He takes our repentant hearts and failures, and in spite of them, in spite of us, He makes things turn out for His glory.

And, if we do His will, He even calls us family.
May the family trait of His gracious humility be passed on through every generation.