Remember those resolutions you were so enthusiastic about eight months ago?

How are they working out for you? Are you among the valiant few who have conquered them, or is it a struggle to even remember what they were?

I hate to admit it, but I’ve been slacking off on my goals for a long time now. My stress level seems to rise quite a bit when I try to create a good habit, so I’ve become lazy about it. But now, after a few pep talks reminding myself that life isn’t about being comfortable, I’m feeling the nudge to try again.

I know August isn’t the time of year we usually talk about renewing goals, but wouldn’t it be awesome if you could still achieve the things you want to this year instead of waiting for next year to start all over again? That idea makes me excited. So, even though I don’t really feel like publishing this post since I haven’t been living up to it, I’m going to. And I’m going to get back into following these tips for tackling change. Who knows? Maybe August will be the month of success. 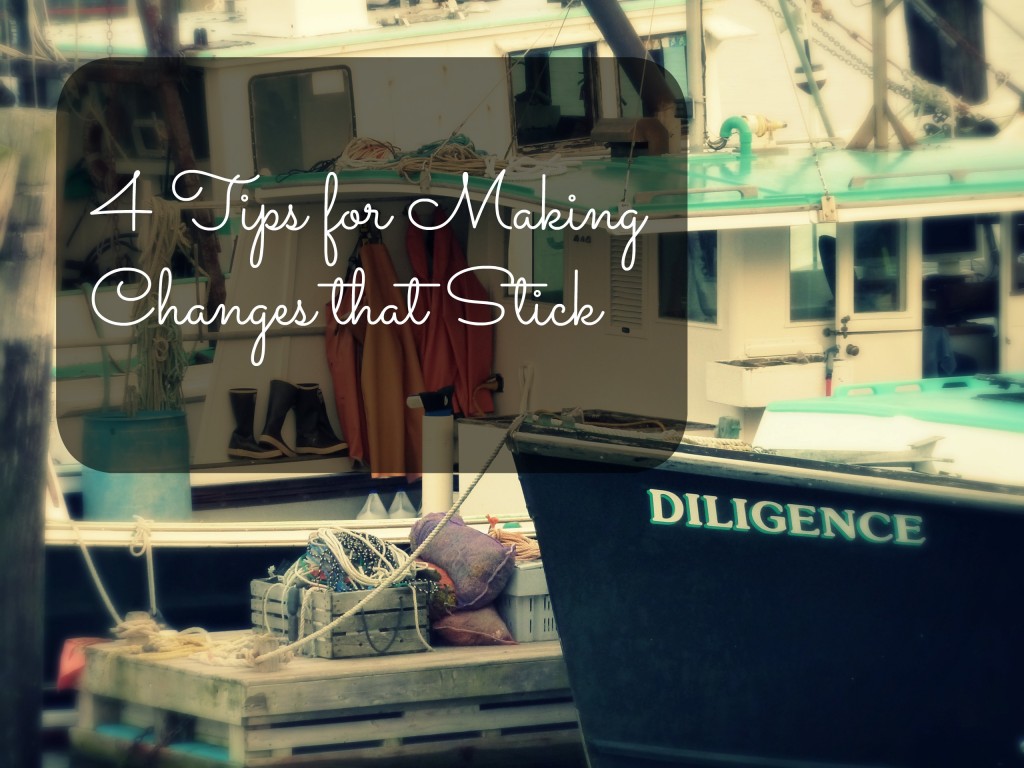 #1: Pray about it. When I learn of something that I need to change in my life, the first thing I do when I want to get serious about it is to ask God to help me. Prayer is where the battle for change begins and ends. {tweet this} When I am praying about something, it 1) reminds me about it, 2) motivates me so I don’t have to keep asking God for the SAME THING forever, and 3) enlists God’s active help with the change. Sometimes I’ll see Him orchestrate things so that I have to do what I should do even if I don’t want to at the moment. 🙂

#2. Prepare yourself in advance. Don’t let indecision make you fail. In Daniel, it says that he determined in his heart that he would not sin. He didn’t wait until he was being tempted to decide what he was going to do. He knew ahead of time what his priorities were. If you know you’re going to be in a situation where you’ll be tempted to give in to your old ways, plan out ahead of time what you’re going to do. Visualize yourself walking past that chocolate cake with confidence- or better yet, only having one small piece and not going for seconds. 😉

#3. Set goals for yourself. Goals are great. They stare you in the face, taunting you until you have conquered them. The more times you have to rewrite a missed goal down on a new to-do list or monthly goal plan, the more motivated you become to complete that goal! Old goals are like an ugly shirt that won’t wear out- tiresome but still annoyingly useful.

#4. Use a visual aid. I read somewhere about a celebrity who uses a system of marking a red X on the calendar when he wants to get in the habit of doing something daily. The longer you do it, the longer your chain of X’s becomes and you don’t want to break it. Earlier in the year I tried this for my goal of being in bed by 10:00, and it was helpful.

Finally, when you fail, don’t become discouraged and give up. I’ve come to the conclusion that if I try to create the same habit often enough, I’ll have to succeed someday. 😉 Creating a new habit is accompanied by much more failure than success at first, but if you persistently ask God for help, He keeps on giving grace, and gradually progress comes. So dust off those goals! There are more than 5 cycles of 21 days left this year- plenty of chances to create a good habit, right?

Question: What are your tips for making changes that stick? What changes would you like to make before this year is over?

“May you be strengthened with all power, according to His glorious might, for all endurance and patience, with joy giving thanks to the Father, who has enabled us to share in the saints’ inheritance in the light.” Col. 1:11-12