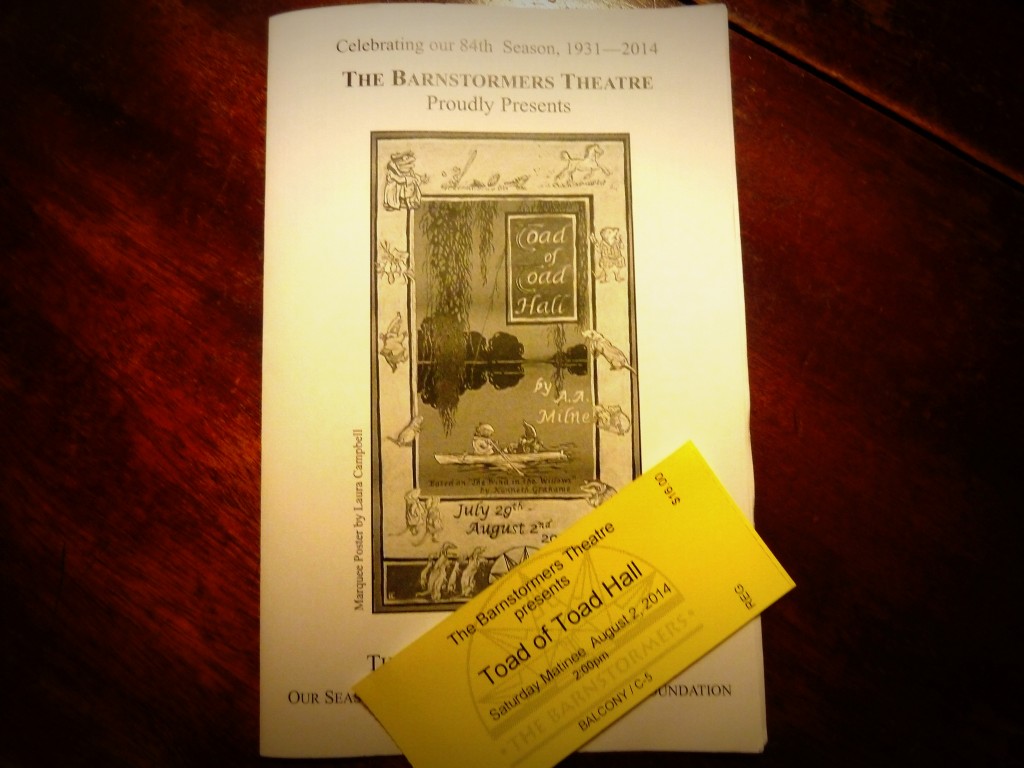 Today my parents and I went to a play at the Barnstormer’s Theatre in Tamworth, NH. We saw “Toad of Toad Hall”, a play by A. A. Milne based on Kenneth Grahame’s Wind in the Willows, which is one of my favorite books. (You can read my review of the book here.) The play was extremely well done and the actors and actresses did an outstanding job of capturing the personalities of each of the characters in the story.

I was also very interested in seeing the town of Tamworth in person, because it is the perfect setting for the novel I am working on at present (my first!). Since I haven’t really talked much about this work in progress yet, let me give you a brief synopsis of the plot:

Margaret Louise Harris, (or Madge, as she is otherwise known) has dreams of becoming a Broadway star someday. But when her mother is injured by a fall, Madge has to take over the daycare her mother runs for children of mothers working in the nearby munitions factory. She’s not happy about spending the summer taking care of children instead of being in her beloved theatre, and she struggles to trust that following God’s plan for her life instead of pursuing her long-held dreams will make her happy.

As you can see, the theatre plays an important part in the story. Summer stock theatre originated in New England (a fact I discovered after deciding that my main character would be involved in a summer stock theatre and that the story would be set in a small New England town, so that worked out quite conveniently for me.)  The theatre that Madge loves so much is a summer stock theatre, held in a renovated barn. Although the theatre in Tamworth is a converted general store, not a barn, the quaint setting is very much the type of town I had imagined and the old houses will give me much inspiration as I develop the setting.

My next quest is to find out more about theatres such as this one as they were in the 1940’s, which will require possibly contacting people at the theatres so I can ask questions and gain more information- something which is way outside of my comfort zone! I think research will be one of the most challenging parts of being a writer, and yet I also think it will be one of the most fun and interesting parts of it.

Here are a few pictures I took while we were driving out of town: