A missionary story about Jim Elliot, Nate Saint, Roger Youderian, Pete Fleming, and Ed McCully – five young men who gave their lives trying to reach a remote Indian tribe in Ecuador and how God used this seemingly senseless tragedy to fulfill His perfect plan. This week’s post is a little shorter than last week’s, and it’s getting to the exciting part! If you missed parts one and two, you can read them here and here. Or you can just jump in and read this week’s post. 🙂 Here is a picture collage of the men and their families (you can click on it to see it full size). 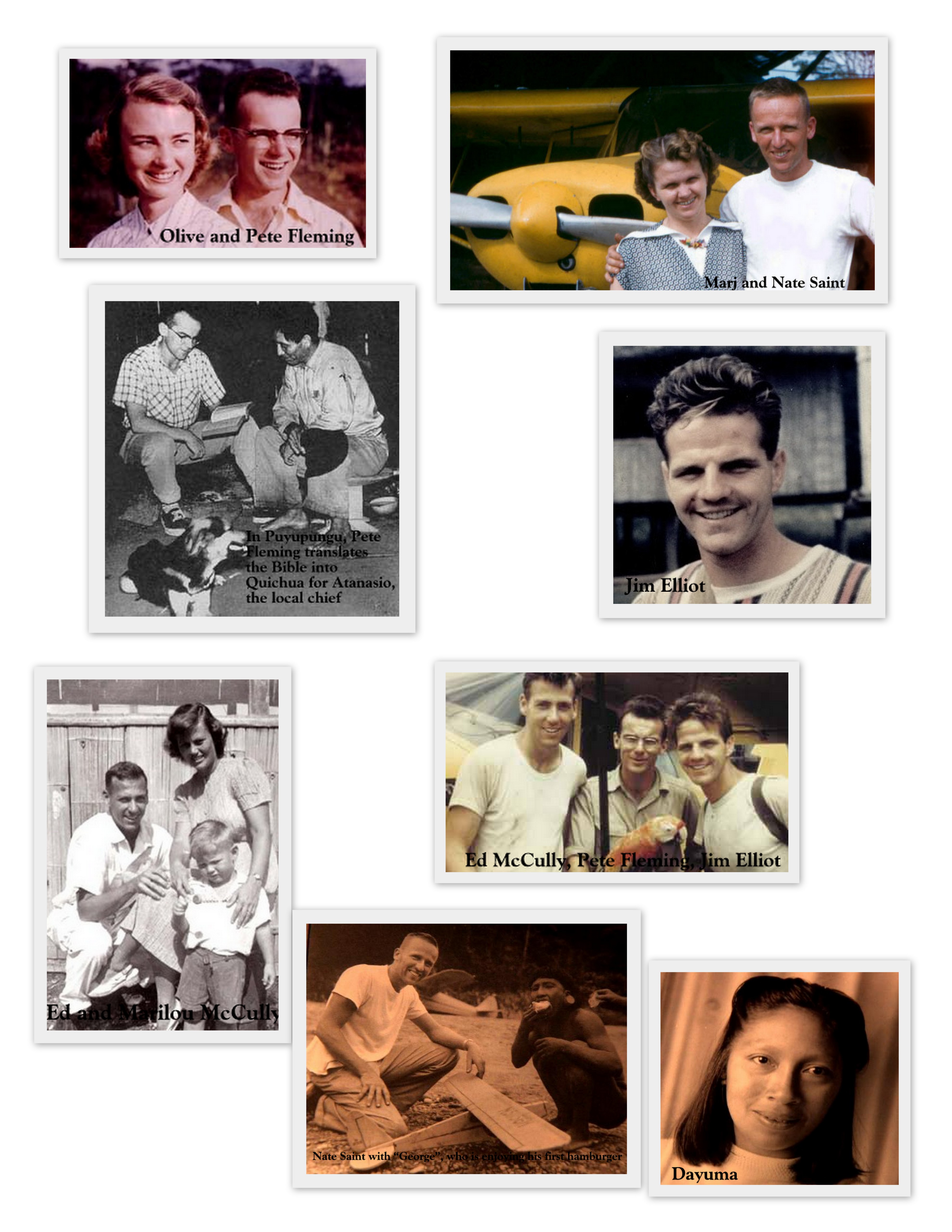 On Thursday, the missionaries listened on the radio for Roger. Maybe he would set the radio up somewhere on the trail, or maybe he was still in Wambimi and hadn’t left yet. But no message came crackling in over the air – not on Thursday, Friday, or Saturday. They thought they would certainly hear from him on Monday – he would be with the Atshuaras by then. Monday came, and still there was no word from Roger. He was on a dangerous trip with no other missionary – just a group of Indians who were known to be mischievous. In addition to that, there were snakes and other wild animals in the jungle. Wanting to know how Roger was doing, Nate Saint and Frank Drown decided they should go check on him, so they gathered some provisions to take to him, plus an air-to-ground telephone, and took off in Nate’s yellow plane. When they got there, Nate’s heart sank. At first glance, the airstrip didn’t look as though it had been worked on, and he knew that if Roger were there, something more would have been done on it. Nate and Frank anxiously searched the ground, trying to spot Roger’s white shirt. Finally, they saw him. Nate hadn’t realized how worried he’d been about Roger’s safety until that moment. But he was there, and Nate and Frank were very glad to see him. They dropped him some food and some gifts for the Indians, and then they flew up higher in the plane and let down the telephone, using a spiraling technique that Nate had developed a while back. The plane flew in wide circles as they let the telephone down on a long, long line that traveled in a circular motion like the plane at first, but then slowly moved towards the center of the circles and then began to drop down toward the ground. After a while it hovered above the ground, tossing a little, and after a few minutes they were able to get it close enough to Roger that he could talk to them. Nate heard Frank’s voice saying, “Hello, Roj; hello, Roj,” and he knew that they had made contact with him. They talked for about ten minutes, while Nate kept the plane flying in a circle so the telephone would stay in one spot. Then they pulled up to put tension on the cable and begin lifting it upward. Roger tied some mail and a note for his wife in a sack onto the cable and then let the phone go. It went sailing up towards the sky, over the trees, trailing behind the plane on 1,500 feet of wire that they now had to reel in. Then Nate and Frank waved goodbye to Roger and went back to Wambimi.
After they landed in Wambimi, Frank told Nate that Roger had asked him to come and land at the airstrip on the following Friday. “It’s impossible!” Nate said. “The strip won’t be ready.” Then he thought about it for a moment and added, “But then, I guess that’s not my department. I’d better get in there as requested and then decide whether or not the strip is landable.” Frank also told him that Roger had said that he needed medicine. The Atshuaras had caught the flu from a group of soldiers who had passed through – that was why Roger didn’t have a radio. The Jivaro who had been carrying it heard about the sickness and refused to go any further. The flu was especially deadly for the Indians, because they had never been exposed to it before and so their bodies couldn’t fight it like the soldiers’ and missionaries’ bodies could.
As Friday drew nearer, Nate was getting more anxious about trying to land on a brand new airstrip. If something went wrong, if the surface of the strip wasn’t well-prepared, it could damage the plane or even endanger his life. But when Friday morning arrived, it was raining, and by noontime it was clear that they wouldn’t be able to go Santiaku’s house that day. The airstrip would be wet and muddy, and they couldn’t add that danger onto the other unavoidable hazards that are part of an operation like this. They took it as God’s way of telling them that they ought to put it off until tomorrow.

The next day, in the early afternoon, Frank and Nate flew from Shell Mera to Wambimi. They unloaded the extra cans of gasoline from the plane and Frank stayed behind while Nate took off alone, keeping the plane as light as possible so he would be able to fly for as long as possible with his supply of fuel. Nate headed for a little river halfway between the Macuma River and the Pastaza River, which was the only landmark for Santiaku’s place. He searched for the tiny clearing in the sea of green from the sky, but was having a difficult time finding his way to “Jimmy’s place”, the secret nickname they used to refer to Santiaku’s home. Except for the exciting discovery of a couple of Indian houses whose position Nate took note of, because the people who lived in them would need to hear the Gospel, too, he didn’t see anything that looked like Jimmy’s place. On his last look around, just as his gas supply was getting low and he was going to turn back, he spotted a small blemish in the unending waves of the jungle to the east. He decided he could take a minute or two to look at it, so he did. Finally, there it was! Jimmy’s place!

Nate swooped over the airstrip, taking a good look at it. His heart sank at what he saw. It could hardly be called an airstrip. Nate knew Roger; he worked hard, without sparing his energy, and he would be desperately needing to get out of there. But Nate didn’t know how he could land on that airstrip. He circled around and looked again at it. Roger had carefully marked off where Nate could touch the wheels of the plane down and how much room he would have to stop the plane in. After studying the situation a little more, Nate decided to try landing. He flew in slowly and landed the plane, rolling to a stop using just a little more than half of the space available.

Immediately a flurry activity erupted around the plane; Roger came running up and without saying hello said, “Have you got any medicine?”
“Yes, it’s in here,” Nate replied, and tossed him the sack holding the medicine. Roger, who looked tired and dirty, with a week’s worth of beard on his unshaven face and his tee-shirt full of holes, ripped into the sack, getting the medicine out as fast as he could. Then he started shouting at the top of his lungs to the Indians, yelling orders to them. Nate was surprised; he knew Roger could speak sharply to people at times, but he had never heard him like this. Nate grabbed him by the arm and said “Slow down now, Roj, slow down; we’ve got time.”
Roger looked back at him and said, “We haven’t got time; we haven’t got time.” Nate didn’t argue with him. Roger handed him two bottles of penicillin and said, “Here, shake these,” so he did. Roger was still hollering orders at the Indians, and Nate thought, “My goodness, how can these people think he’s a friend when he talks to them like this?”
But Nate quickly learned the reason for Roger’s intense manner. Almost everyone there was getting shots, and some of them looked ready to die while they were waiting to get the medicine. The chief, Santiaku, was one of the very sick ones, and while Roger was giving shots he told Nate that one of the other chiefs had died the week before. When Roger had arrived, he had given medicine to those who were the sickest, but now those who hadn’t been as sick before were getting worse, and until Nate had arrived, he had had no more medicine to give them.
Roger continued shouting orders, and the Indians obeyed them. At that moment he was the chief, in complete charge of the situation. He gave the medicine to the sickest people. As he was coming to the end of the last bottle of medicine, he looked across the clearing, and there coming out of the forest was Tysha, a close Atshuara friend. He arrived in time to get the last drop of penicillin from Roger’s needle. “Praise the Lord,” said Roger, “it’s unbelievable, but here he is, and this will probably save his life!”
Roger straightened up for the first time, looked at Nate, and smiled. The strain was off his shoulders. Nate looked at his watch; they had only a few minutes until their deadline for leaving. They took off, and in the plane on the way back to Wambimi, Roger told Nate how the work on the strip had been held up by sickness, and how he had worked on the strip himself because there was no one else to do it. “You can’t imagine how I prayed that you wouldn’t make it on Friday, as we had originally planned,” said Roj. “Then Saturday I prayed you would get here, and began to wonder if you’d make it.” Roger went on to tell how, by four o’clock, he was getting discouraged that Nate wasn’t coming, but then they heard the plane. It was coming – but then it turned away. Half an hour later, however, they heard it coming again, and there was the little yellow Piper Cub flying in over the trees.
These two men, filled with the pioneering spirit of the first Christians, but using the modern-day tools they had available to them, had pushed back the boundaries of their faith one more step. Not only Roger and Nate, but also Jim, Pete, and Ed were missionary pioneers – always looking past the areas that had been reached with the Gospel into the unexplored horizons. Just over the distant ridges were the Waodani.
“One of these days we’re going to spot those boys,” Jim Elliot had said, “and from then on they’ll be marked men!”